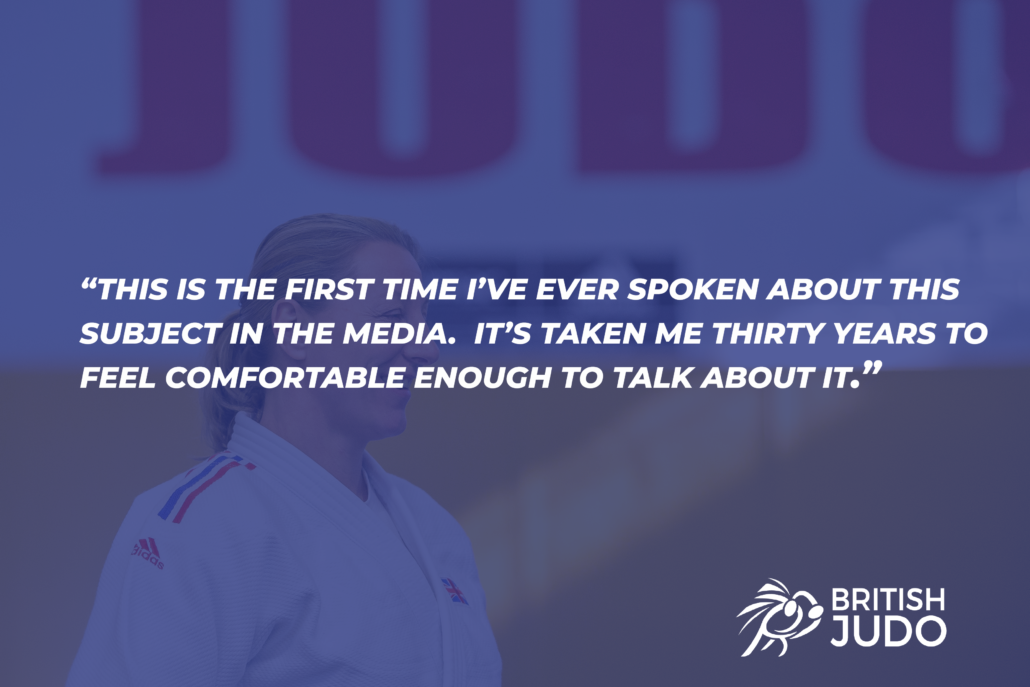 I got into judo because it was my seventh birthday present. My dad did judo and I just wanted to be like him at that age, it also meant I could stay up late on a Friday night!

I’m terribly competitive, no matter what I play and if I’m perfectly honest, I liked fighting the boys! Overtime I got pretty good at it and was driven by the desire not to let my dad down.  He put a lot of time, money and effort into my judo.

I was about 21 when I came out to my family, when most people found out there was no real big reaction. With your mum and dad, it’s slightly different of course, they’re your parents.

My mum took it quite badly, to be honest, but now it’s fine and she embraces it.  With my dad it was a weird one! He was just said, “Ok that’s fine, now let’s carry on, let’s do judo”, that was just his way of thinking. It didn’t really bother him.

I have a brother and sister and when I was younger they basically told me I was gay. They were like “well we knew that!”

You always get teased as kids if you’re a tom boy, especially back in those days. They’d use the gay word in a derogatory way and you’d get taunted a bit, kids can be tough at times.

However, I didn’t get taunted so much because I did judo, they knew they’d be in trouble if they did!

When people in the judo world found out, it wasn’t seen as a big thing. I think because I was an established judo player at the time and I grew up in an era where there were a few closeted lesbians, so in the ‘judo world’ I didn’t think of it as such a big thing.

Outside of judo, people who had known me from when I was ten or eleven years old, they were like “yeah, ok that’s fine”. I’m not sure what the wider community would say behind my back but face to face everything was fine.

Publicly when I was a young athlete, it was never ever spoken about, I was very closed about it. I didn’t even want reporters to ask me the question in interviews: “Have you got a boyfriend?”

I’d just say “no” but I wouldn’t elaborate either way.

Even now, if people ask me, I’ll say yes but other than that, I wouldn’t go out there and say it ‘loud and proud!’.

This is the first time I’ve ever spoken about this subject in the media.

It’s taken me thirty years to feel comfortable enough to talk about it.

I think about it differently now, it’s so important to have acceptance in yourself about your sexuality.  Only then can you feel comfortable to talk about it.

With this generation it’s so much better than it was for me, you can talk about your sexuality to the wider community without fear of repercussions.

I’ve got a baby son, Owen with my partner Soph and he’s going to grow up in a house with a same-sex relationship.   So, for my child it’s a big thing that I’m comfortable with how I am, and not fearful of representing that.

Why shouldn’t I be talking about it? Why should I be guarded about it? It’s important that he knows I’m proud of who I’ve become.

Away from my home life I spend most of my time around judo staff and athletes, the majority of whom are from a generation where it’s just the norm. A lot of the guys that I work with have known me since I was 15 years old, so we are an extended family really.

The players that I work with day to day, they all know. They are all interested in Owen. Sometimes more interested than me! It’s a good way to get out of working so hard on the mat… by getting me chatting!

I’m comfortable with everything within my life which is probably why I’m talking about it now.

There will be young girls or boys within judo and other sports who feel they can’t talk about their sexuality it because people, possibly of my generation, don’t talk about it.

The more people do talk, the more those youngsters will feel comfortable with it.

Rather than bottle everything up and torture themselves, they will come out and talk about it.

I think the role that I’m in, as a coach and parent, I have to do that now.

I’m going to sit down with Owen at some stage and talk about why he’s got two mums. That’s huge, so why can’t I then talk about my experience to help, not just my own child but other children out there?

I think everybody, in every walk of life, including sport, has a responsibility to make anybody’s life better.

Whatever their sexuality and whatever they want to do in life, we should all aspire to make people feel comfortable about themselves.

Yes, judo has a big part to play because that’s my life, but society as whole must take hold of it and make people feel comfortable in this world to be who they are.  We are all born into this world without a choice of our personal circumstance.

I think if more people embraced that responsibility to be an ally even if they’re not part of the LGBT community then the world would be a better place.

Destination@BritishJudo Update: York Hub Scroll to top
Select the fields to be shown. Others will be hidden. Drag and drop to rearrange the order.
Click outside to hide the compare bar
Compare