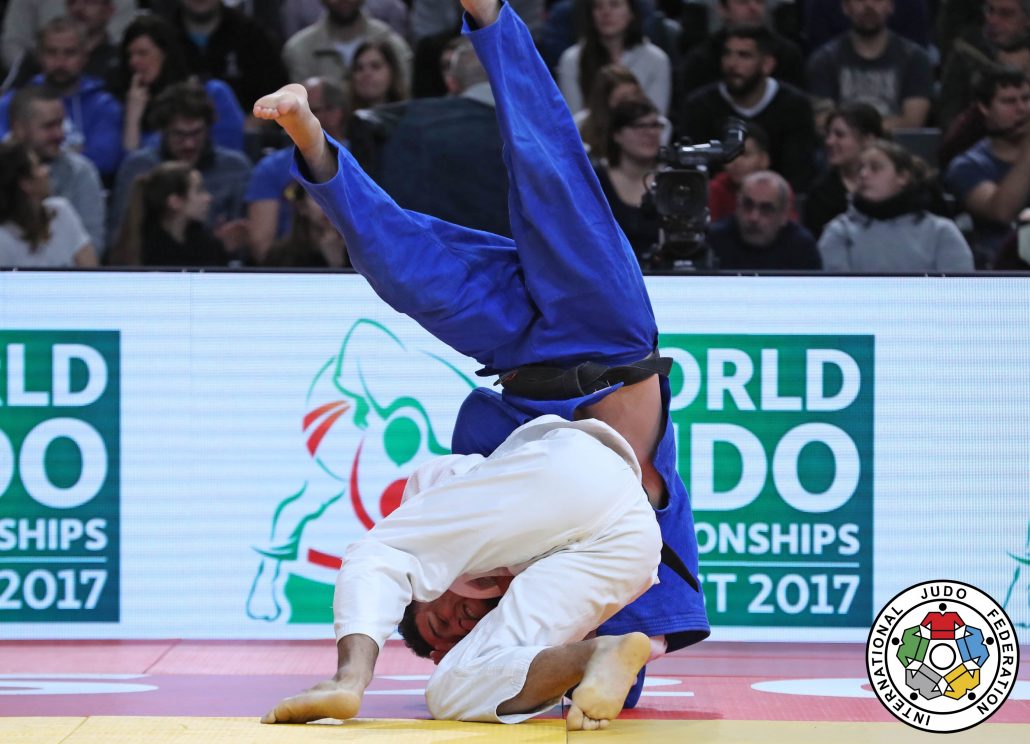 Hello all, it’s been a busy month since my last blog with GB players in action across Europe and not surprisingly that will be the focus of my blog.

We kicked things off at the Paris Grand Slam and it was a positive weekend from our point of view in particular, the performances of Max Stewart and Lucy Renshall in terms of the level of performance and the opponents they fought.

It’s the first time they’ve fought in Paris and you don’t know how young players are going to feel competing in front of a big crowd but it was very easy for them. When you saw them in the warm-up area they weren’t nervous, they were more excited but very focused and on the mat the quality of the judo was good.

In their performances against the high-ranked and better players they showed no fear and they went out there to do their judo and they displayed some really, good quality judo which bodes well. With the technical work we’re doing against the trademarks, we’re now seeing evidence that they can apply that, not just in competition and training but at the highest level and against quality opposition.

The Paris training camp was very good and it was positive to see a number of British fighters, who didn’t compete at the Grand Slam, go out to the camp and put in a few days of hard training. This fits in line with the global randori strategy and it was good to see WCPP and GB Squad players recognising that high quality randori is a fundamental component of performance and training.

We also put a few of our young players in the Continental Opens in Italy and Bulgaria and there were some good, positive performances with the highlight being Gemma Howell’s performance in Bulgaria. She was coming back from a long-term injury, fighting at -70kg and gave Canada’s Kelita Zupancic, who won silver in Paris the week before, a really good fight. There were also some strong performances from the guys over in Italy, namely Ben Fletcher’s bronze medal while the younger players in Eric Ham, Neil MacDonald and Dan Powell put in the level of performance against senior opposition that is very exciting and shows that we’ve got the players coming through the system, both male and female.

Monday mornings are always easier when you come away with a bronze medal in your first European Open of 2017! pic.twitter.com/yi85Vmdqsm

As part of the development of those young players we took a group to the Olympic and Paralympic Games last year as training partners. It’s all about giving them exposure and so they can see the bigger picture. If they don’t know what the standard is, it’s very hard then to prepare for that level but now they understand the big picture and they’re ambitious enough that Tokyo is what they’re aiming for. We’ve got competition in various weight categories, which is positive, certainly at 57s and 63s it’s going to drive the other girls on.

At GB level we’ve not had that sort of depth in a long time but the fact they’ve had that exposure is all part of the strategy. We’re always looking at the bigger picture and we’re not planning for one year, we’ve got a plan and framework over a four-year period.

Moving onto Germany and the Dusseldorf Grand Prix, four fifth places, four medal fights, good solid performances all the way through. Obviously disappointing for Lucy Renshall, great performance including a win over a World top ten player in Mariana Silva (BRA) but getting injured in competition fighting Clarisse. The injury is requiring surgery and length of time out of competition, which will be fully determined once she’s had surgery but it will be a short period of time before we can bring her back on the mat fully.

The good thing is that with the strength of medical support we have on the WCPP within a ten-day period after the injury she had been reviewed, had the MRI, the consultant reviewed the scan and she was booked in for surgery (which took place this week). We have already put together a full and comprehensive return to play programme in place and she’s already started her rehab with full support from Medical and S&C.

Tough to end to a very good day's judo from @bf130392 but lots of positives for the British judoka #WeAreGBJudo #JudoDdorf2017 pic.twitter.com/jIAR8c8j2h

As well as Lucy we saw a great performance from Ben Fletcher in Dusseldorf. He fought well all day and had a great match against Aaron Wolf of Japan in semi-finals losing out in golden score. Of course, the weekend just past we also had Alice Schlesinger pick up gold at the Baku Grand Slam. It was great to see her back. She’s a very popular member of the team and she looked very sharp when she stepped on the mat and put in a good performance to beat the Slovenian Leski, who is a talented player.

The expectation now when we go to competitions is we’re expecting to get results. We can blood young players and they can be competitive and our best players are always going to be there or thereabouts fighting for medals and in the big events, the way the programme is shaping, we’re always going to be expecting to be in the medal fights going forward. We’ve got really good depth and great talent in the pipeline coming through so we can certainly be excited for Tokyo, and beyond as well. But the way we’re looking, with a fully fit team we’re always going to be competing for the medals and that’s in any level of competition.

Positive Result at Extraordinary General Meeting (EGM) Scroll to top
Select the fields to be shown. Others will be hidden. Drag and drop to rearrange the order.
Click outside to hide the compare bar
Compare