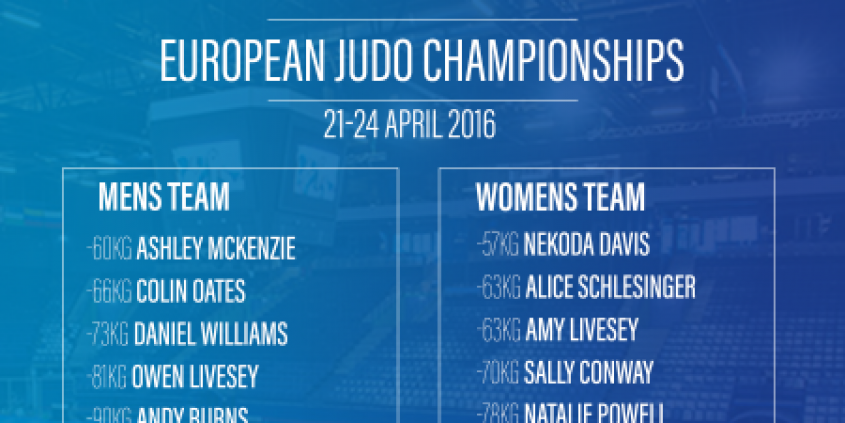 A thirteen strong British Judo team has been selected to represent Great Britain at the 2016 European Judo Championships in Kazan, Russia from 21-24 April.

The Europeans are the last major championships ahead of the 2016 Rio Olympic Games in August with up to 400 qualifying points on offer.

Two members of the team, Colin Oates and Ashley McKenzie, have medalled at the European Championships in the past with McKenzie the last to medal at Budapest in 2013.

British judoka have already enjoyed success on the international stage this year picking up medals at the Paris Grand Slam and the Dusseldorf, Tbilisi and Samsun Grand Prix. The qualifying period for the Olympics Games ends on May 30th after the IJF Masters in Guadalajara, Mexico.

2016 Paris Grand Slam bronze medallist Natalie Powell is looking forward to improving her fifth and seventh place finishes at the European Championships and knowing she will have to face many of the same athletes again in Rio if she qualifies:

“My year so far has gone relatively well. Winning my first Grand Slam medal has to be the high. However Europeans has been my main focus from the start and training has all been about peaking for the Europeans.

“Just missing out on a medal last year was devastating so I will be looking to put me best performance in this year and get on the podium.”

“The European Championships is the last major championships in the Olympic Qualification period which is an important event as this can count as a 100% sixth result towards qualifying for Rio. Additionally, this is a Championship event and having the ability to be able perform on the day when it counts is critical in being able to deliver your best performance in a major Championships.

“We go to these European Championships with high expectations. The team on the whole across the IJF World Tour have performed well and won a number of Grand Prix and Grand Slam medals and defeated some of the best players in the World.

“This is gives us great confidence in knowing that we have the players who can compete against the best in the World and see these European Championships as an extremely important opportunity to perform maximally in a major championships as we countdown to the Rio Olympic Games.”

Burns added to European Championships squad Scroll to top
Select the fields to be shown. Others will be hidden. Drag and drop to rearrange the order.
Click outside to hide the compare bar
Compare