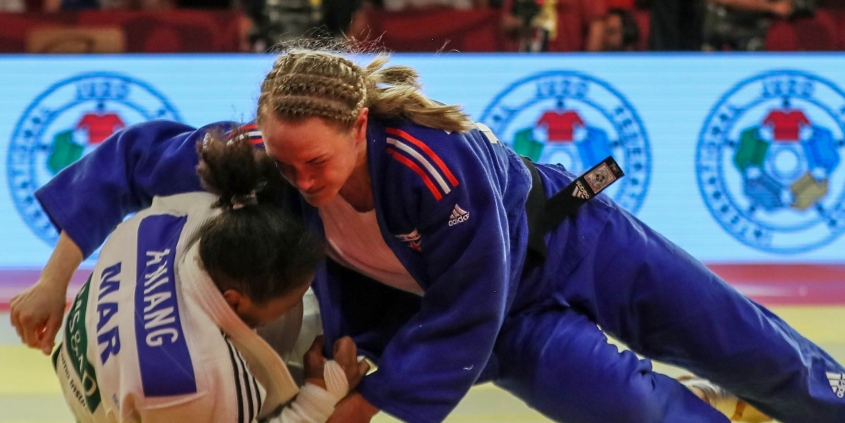 The IJF World Tour heads to Germany this weekend and the city of Dusseldorf for the third edition for the Dusseldorf Grand Slam.

With the Olympic Games edging ever closer, every competition and every contest, counts towards Olympic qualification and selection to the Tokyo Games.

Following on from the recent Paris Grand Slam, Dusseldorf will be adorned with Olympic and World Champions alike, and joining them will be six British Judoka, all looking to claim vital qualification points and secure their participation at Tokyo 2020.

Ashley McKenzie (-60kg) will be looking to recapture his late 2019 form that saw him finish 7th at the World Masters and 2nd at the Perth Oceania Open.

So far this year McKenzie has unfortunately failed to make it past his opening matches, both defeats coming by way of an indirect hansoku-make after amassing three penalty shidos.

Seeded 6th, McKenzie has an opening round bye in Pool D and will face the victor of the opening round match between Ibrahim Issa-Sani (CHA) and Mohamad Akkash (IRT).

European Games bronze medallist, Chelsie Giles (-52kg), competing in her second Dusseldorf Grand Slam, is seeded 7th and has been drawn in Pool C. After an opening round bye, Giles will face Taciana Cesar (GBS).

The battle for British Judo -63kg dominance intensifies this weekend as the top two judoka on the Olympic qualification list start their 2020 campaigns.

Amy Livesey is currently our top ranked athlete with Alice Schlesinger just over 400 points behind. Both players are competing this weekend for the first time since the Masters in December.

Livesey has been drawn in Pool B, and after an opening round bye, will face Mokhee Cho (KOR) in round 2. The pair last met in the final of the Montreal Grand Prix in 2019 where Livesey took silver.

Meanwhile, Schlesinger has an opening round match against Meriem Bjaoui (TUN).

Gemma Howell (-70kg) is entering Dusseldorf full of confidence following her bronze medal in Paris two weeks ago. Seeded 7th, she has been drawn in Pool B, and following an opening round bye, will face the winner of the opening round match between Naranjargal Tsend-Ayush (MGL) and Gabriella Willems (BEL).

Petgrave has been drawn in Pool D and will face Paul Kibikai (GAB) in the opening round.

Preliminary rounds are due to start at 08:30am on Friday and Saturday and 09:00am on Sunday with Final Block scheduled to start at 16:00 GMT.

You can watch all the commentated Preliminary Rounds and Final Block action unfold live on the British Judo homepage. World Silver Medallist, Barbara Timo, trains at British Judo Centre of Exce... Scroll to top
Select the fields to be shown. Others will be hidden. Drag and drop to rearrange the order.
Click outside to hide the compare bar
Compare