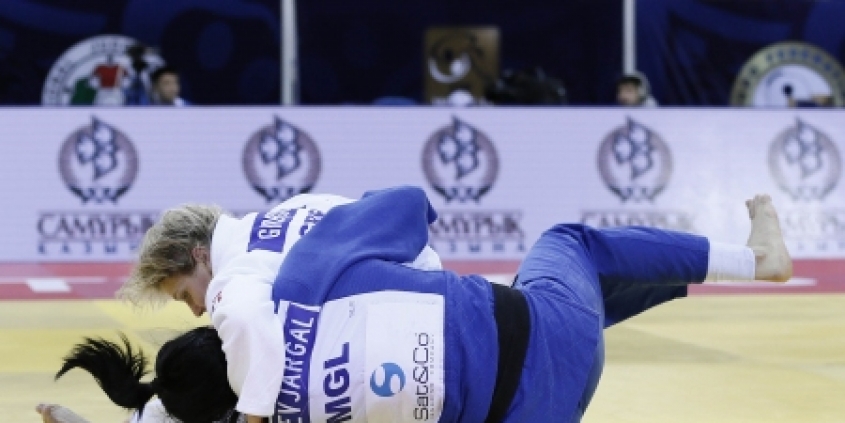 Gemma Gibbons fifth place was Britain’s stand out performance on the final day of the Almaty Grand Prix in Kazakhstan. The London 2012 silver medallist missed the bronze medal contest through injury, finishing the day with a fifth place.

Gibbons started the day with a waza-ari win over Lkhamdegd Purevjargal of Mongolia, setting up a fourth match up in the -78kg quarter-final against Portugal’s Yahima Ramirez. With Ramirez chasing the fight and picking up the maximum four shidos (penalties), Gibbons progressed to the semi-final.

It was an action packed semi-final for Gibbons, with China’s Zhehui Zhang going a penalty down before scoring a waza-ari. Gibbons fought back and pushed Zhang right to the wire, but two yuko scores and three shidos against Zhang was not enough to take the victory.

In the bronze medal contest, Gibbons was to face Victoriia Turks of Ukraine. However, due to an injury sustained earlier in an earlier contest, Gibbons didn’t fight the contest and finished the day with a fifth place.

In the -90kg category, Frazer Chamberlain showed some strong transition skills, throwing his opponent, Mihail Marchitan (UAE), for waza-ari and then getting the hold down for the victory. However, Chamberlain couldn’t get past Mammadali Mehdiyev (AZE), who threw the British judoka for ippon late in the contest.

Andy Burns (-90kg) took the win in his first round contest against Milan Randl (SVK) on shidos, but lost out in the next round to French judoka, Axel Clerget who went on to win gold.

Chris Sherrington (+100kg) took the win in his first contest but was caught on the attack and thrown for ippon late in his second round contest.

Ben Fletcher (-100kg) and Sarah Adlington (+78kg) weren’t able to get going in Almaty, both losing out in their first rounds.

Norwich Premier Judo club win the inaugural East Anglian Team championship Scroll to top
Select the fields to be shown. Others will be hidden. Drag and drop to rearrange the order.
Click outside to hide the compare bar
Compare