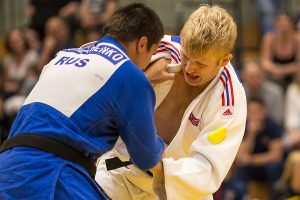 Following his recent victory at the IBSA Grand Slam in Baku, Hull’s Chris Skelley (Ian Johns) has been promoted to the world number 1 ranked player in the -100kg weight category.

We caught up with Chris, the current European Champion and a double World Championship bronze medallist, following a recent training camp in Israel, to get his thoughts on being ranked world number 1.

‘It’s a little surreal to hear myself called World Number 1, but we have to be realistic, the hard work doesn’t stop. I know Gogotchuri (Geo) will want that top spot back, so I cannot rest on my laurels. I now have a massive target on my back heading into the World and European Championships and I know I will have to deal with the pressures that that brings. However, if I perform to the best of my ability, which I know I can do, I will hopefully bring home a medal.’

Chris has been based at the British Judo Centre of Excellence in Walsall since it opened 6 years ago. At the age of 19 he made the life changing decision to move from his family home in Hull to relocate to the Midlands, but this is not a decision that he regrets.

‘I’ll admit that it was a bit of a reality check, I had to grow up fast, not only as an athlete, but a person. I had to learn how to cook for myself, clean and live with other people.’

‘The Centre has changed and grown massively during my time here, personnel have come and gone, but despite this the philosophy has always remained the same: Hard Work, Never Give Up and Always Perform to the Best of Your Ability. You can be the most talented athlete in the world, but if you do not abide by those morals, you will never succeed.’ 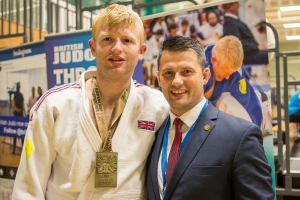 Chris is coached by former judoka Ian Johns, who spearheads the British Judo Paralympic Programme, and he is a man who Chris holds in the highest regard.

“I have been very fortunate as we have been on this journey together, ‘Johnsy’ started at the Centre just after me, but our relationship precedes that as he coached me back home in Hull as part of the England Talent Development Session on a Wednesday evening. He also took me to London 2012 as part of the PIP (Paralympic Inspiration Programme).’

Ian recalls sitting with Chris at the London Paralympic Games in 2012 and Chris turning to him and saying, ‘That’s going to be us in Rio’. Four years later at the Rio Paralympic Games, Chris turned to his coach, and friend, and said ‘I told you we would be here’.

‘While Ian is my coach, off the mats we are very good friends – he might disagree with that! We have a lot of respect for each other and I know I would not want anyone else in my chair. He really pushes me to my limits and challenges me to ensure I have the correct morals and drive, not just as an athlete, but as a person.’

Chris has always had a passion for judo and it was a hobby from a young age, when he left school his love of cars led him to become an apprentice mechanic working for minimal pay and judo was a release from the long hours of manual labour. It was at this time that Chris’s eye condition worsened to a point where he had to leave his job.

Having experienced the world of 9-5 work, he is more appreciative of the position he now finds himself in as a full time athlete who gets to do his hobby as a job and travel the world doing what he loves most.

‘I am very lucky to have the opportunity to do this sport and have the support that I do, I am motivated every morning to wake up and get out of bed because of my love for the sport, and it is something that I want to continue to do for as long as I possibly can.’

Chris’s attentions now turn to the World and European Championships in July and the Grand Prix in Uzbekistan in September.

Wolverhampton Judo Club to hold 12-hour ‘Throw-a-thon’ Scroll to top
Select the fields to be shown. Others will be hidden. Drag and drop to rearrange the order.
Click outside to hide the compare bar
Compare
Wishlist 0
Open wishlist page Continue shopping