You are here: Home / Coaching / 2016 IJF Referee and Coach Seminar held at the Kodokan 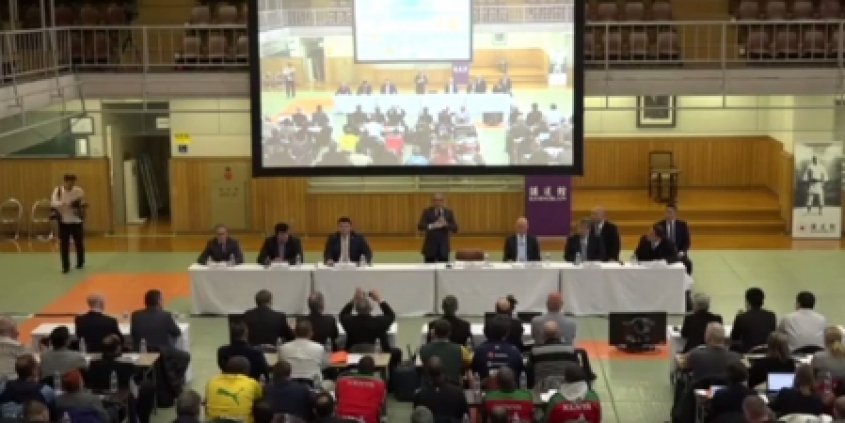 320 delegates from across the world were in attendance at the iconic Kodokan in Japan for the International Judo Federation’s annual Referee and Coach Seminar.

IJF Head Referee Director, Juan Carlos Barcos, supported by Jan Snidjers, Daniel Lascau, Armen Bagdasarov and Japanese VIP’s including Yasuhiro Yamashita, opened the seminar which had a range of topics on its agenda for discussion.

With the Rio Olympic and Paralympic Games on the horizon, there were no new rules or new interpretations announced at the seminar. Instead, the seminar sought to clarify existing interpretations on a wide range of issues. However, it was indicated that the IFS’s Referee, Coaching, Education and Sports commissions would look into possible rule changes for 2017 following the conclusion of the Games.

The seminar started with extensive high quality video clips of chosen scenario’s for all to consolidate their understandings. This was followed by the practical work where delegates took part in a session focusing on bear hugs, Uchi-mata-gaeshi, Waki-Gatame, Kawazu-gake, below the belt impact, edge penalties and using an arm as a lever below the belt. The session was led by Daniel Lascau with Juan Carlos Barcos directing the final referee interpretations.

The introduction of techniques from other fighting arts to judo, their impact and how they are refereed were also discussed at length with the safety of the judoka being the primary concern.

A wide array of video clips and footage were used throughout the seminar to aide discussion on a range of different topics including: Nage-waza valid for scoring, Tachi-waza versus Ne-waza, Kaeshi-waza, the definition of immediately in the rules and interpretation of the bridge action.

Elsewhere, it was advised that a contest cannot be stopped because of a coach complaint(s) or queries and that referees can only stop a contest when they deem it necessary to do so for technical evaluations with the care system or discussions with the jury.

Juan Carlos Barcos also confirmed that the current process used to select referees for events and contests was expected to continue following positive feedback received from coaches and judoka.

Juan Carlos Barcos concluded the seminar by reiterating that referees, coaches and athletes must always show each other respect in order to build relationships and work together to get an increasing proportion of the correct decisions. All seminars should be used as an ideal opportunity to bring the whole judo family together as one.

British Judo Regional Delivery Officer Keith Merrick was one of the delegates in attendance: “It was a great honour to attend the seminar at the Kodokan on behalf of British Judo. The value of British representation at this event cannot be underestimated. I have brought back a lot of useful information and guidelines which the referee and coaching community of Great Britain can benefit from”.

All referees will be sent information on when and where these seminars will be taking place shortly, these details will also be available on the British Judo website.

The video recordings of the Seminar can be viewed on the IJF’s YouTube channel here and here.

Sign up to a new campaign and get new members at your club! Scroll to top
Select the fields to be shown. Others will be hidden. Drag and drop to rearrange the order.
Click outside to hide the compare bar
Compare