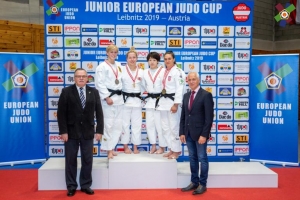 Kelly Petersen-Pollard (Fitzroy Davies) (-70kg) was in great form this weekend, taking gold at the European Junior Cup in Leibnitz, Austria. The event traditionally acts as a ‘warm-up’ competition prior to the major championships, and with the World and European Junior Championships taking place later this year, a number of the world’s top junior athletes were competing.

Petersen-Pollard (centre left) has been in golden form of late, taking gold at the European Senior Cup in Podcertrtek last weekend. Petersen-Pollard beat Germany’s world number 7 Marlene Galandi in the final to claim gold. The result sees Petersen-Pollard rise to 11th in the world junior rankings. 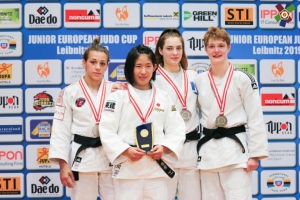 Sian Bobrowska (Davies) placed 5th in a world class -48kg category, with all the medallists being ranked in the top 10 in the world junior rankings.

Thirteen of the British Judo senior team were also in action this weekend at the European Open in Cluj-Napoca, Romania. 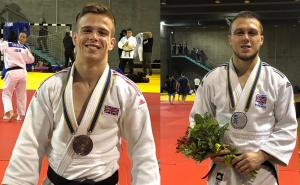 A week after claiming his first senior medal at the European Cup in Podcetrtek, Scott Thomson (Davie Reilly) (left) again claimed bronze with an accomplished performance to cap a fantastic two weeks for the Scottish athlete.

Scotland’s Stuart McWatt (Stuart McWatt) (right) claimed silver in the -81kg ahead of representing Team GB at the European Games later this month.

Neil Eckersley 7th Dan to exhibit his artwork at 2019 World Championships Scroll to top
Select the fields to be shown. Others will be hidden. Drag and drop to rearrange the order.
Click outside to hide the compare bar
Compare