It was a golden weekend for the younger members of the GB Judo squad as they travelled to Germany for the competitive Bremen and Thuringia International Masters events.

Although not an official European Judo Union (EJU) event, they regularly attract a world-class standard of field with entrants from across the globe and coming away with a medal is a strong feat.

The younger female members of the squad travelled to Thuringia to continue their experience of continental standard judo and the likes of Olivia Piechota (-48kg), Molly Harvey (-48kg), Chelsie Giles (-52kg) and Kiera Bateman (-52kg) were joined by the likes of Lubjana Piovesana (-63kg) and Jessica Richardson (-78kg). 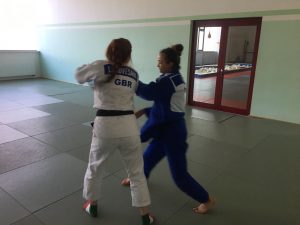 Giles and Piovesana prepare for their medal contests

It was Lubjana Piovesana and Chelsie Giles that demonstrated great displays of judo as they came away with a silver and bronze medal respectively. Chelsie Giles impressively brushed aside 2nd seed Ainur Suleimen (KAZ) in her opening contest as she coasted through the early rounds, throwing for ippon to progress past Lalou Lebrun (FRA) and Danique Janssen (NED). She came up against Jessica Lima in the quarter finals but could not find a way past the stubborn Brazilian as she fell into the repechage. Giles was able to shrug off the disappointment of the loss however, defeating Amber Ryheul (BEL) to come away with the medal.

Piovesana breezed through her opening pool stage as she won her opening five fights, with her opponents scoreless throughout, barring a single shido in her third contest. She came up against Junior Pan American Yanka Pascoalino (BRA) in the final but this proved to be a step too far for the 20 year old as Pascoalino used her experience to snatch victory, and with it, the gold medal. 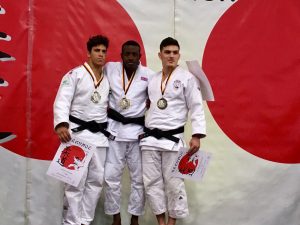 In-form Jamal Petgrave (-90kg) took home his second medal in as many weeks as he struck Gold to win GB Judo’s first U21 gold medal at the Bremen event since Craig Fallon, over 15 years ago, back in 2001. He followed up his bronze medal win last week at Coimbra with an impressive display saw Petgrave secure 4 ippons and 4 wazaris across his six contests throughout the event.

Special mentions must also go out to Archie Platt (5th, -66kg – Cadet), Charlie Young (7th – Cadets), Connor Wilson (7th, -60kg), Oliver Park (-60kg) and Del Imrie (5th, -90kg). Platt finished in fifth place, narrowly missing out to the Cadet European Champion, Dennis Mauer by 2 wazaris to 1. He showed an incredible resilience but could not contain Mauer as he fell into the repechage but could not find a way past Latvian Artjoms Galaktionovs in the bronze medal contest. Del Imrie (-90kg) placed 5th but fought well with notable victories over German and French opposition, who all entered strong squads for the tournament.

2017 Rules Changes Set for Implementation Scroll to top
Select the fields to be shown. Others will be hidden. Drag and drop to rearrange the order.
Click outside to hide the compare bar
Compare