You are here: Home / GB Judo / Tough opening day for the Britons at Tbilisi Grand Prix 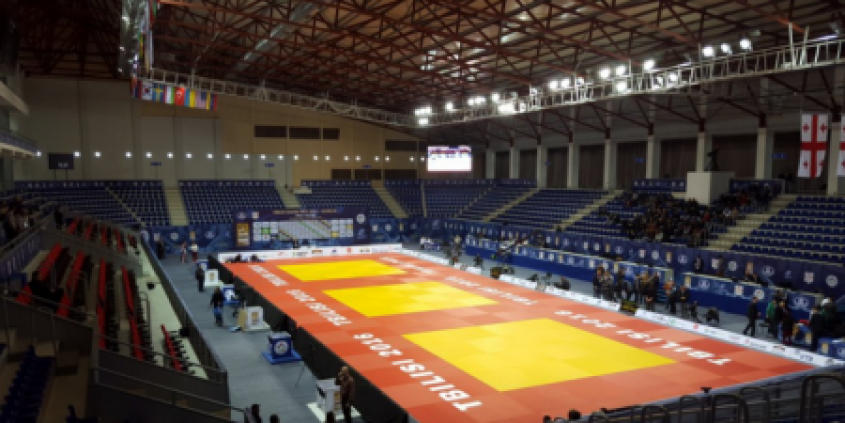 It was a tough opening day for the British judoka in action at the 2016 Tbilisi Grand Prix as all three athletes exited the event in the preliminary rounds.

Kimberley Renicks’s (-48kgs) match with Azerbaijan’s Aisha Gurbanli was the first contest of the event on Mat 1. The Kanokwai/Edinburgh judoka was looking to avenge a defeat at the Panamerican Open in Buenos Aires earlier this month, which was the only previous meeting between the two. Renicks was on the back foot for much of the contest conceding a waza-ari two minutes in. But Renicks showed great determination to hit back, claiming a yuko before forcing a tap out for the Ippon in the final minute.

That set up a tough second round draw for the Scot against World number 4 Irinia Dolgova of Russia. Renicks had yet to record a victory over the Russian in any of their 3 previous encounters and was unable to reverse that trend in Tbilisi. Dolgova followed up a yuko score with an ippon in the second minute of the contest to knock Renicks out of the -48kgs competition.

Nathon Burns’s day started against 23 year old Carlos Cases (ESP) in the 66kgs. The Spaniard looked uncomfortable from the start with his ribs heavily strapped up. The Camberley judoka took advantage attempting several athletic throws throughout the contest in a threatening performance. In the end Burns won the contest 2-1 on penalties to progress to the second round where he would meet 7th seed Sergiu Oleinic of Portugal.

Burns was on the offensive from the outset as he tried to gain supremacy in the early exchanges. However, the 30 year old Portuguese used all of his experience to deflect the Briton’s attacks. A frustrated Burns conceded 3 penalties in the second half of the contest to exit the -66kgs competition in the second round.

Elsewhere Bristolian Gregg Varey was also in action in the -66kg category. Varey faced a strong opponent in Belgium’s Jasper Lefevere in the first round. The Belgian recorded a yuko before scoring an ippon to defeat the Briton in his opening contest at his second Tbilisi Grand Prix appearance.

Jan Gosiewski (-73kg) and Tom Reed (-81kg) will be on the mat tomorrow in the men’s as the action continues from the Sports Palace, Tbilisi. In the women’s Alice Schlesinger and Gemma Howell will be competing in the -63kgs, whilst Jemima Yeats-Brown will make her Grand Prix debut in the -70kgs.

Watch all the action live on ippon.tv from 06.00am GMT and follow @BritishJudo on Twitter for live updates on British competitors.

Impressive Silver for Howell at Tbilisi Grand Prix Scroll to top
Select the fields to be shown. Others will be hidden. Drag and drop to rearrange the order.
Click outside to hide the compare bar
Compare