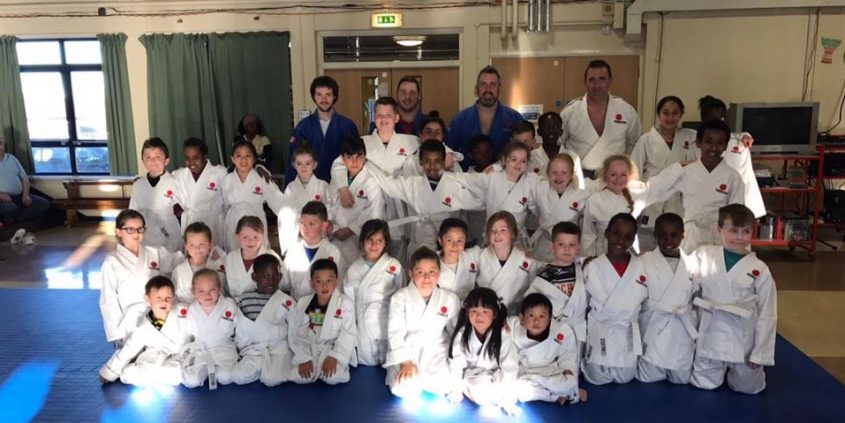 Congratulations to British Judo Association Member Club, Simply Judo who have been nominated for a UK Coaching Award!

Based in Northern Ireland, Simply Judo’s Refugee Integration Project is a finalist in the “Coaching Intervention of the Year” category. The UK Coaching Awards honour great coaching from people and organisations who have demonstrated outstanding success over the previous 12 months. Hosted by UK Coaching, the event raises the profile of coaching and the role it plays in transforming lives and inspiring an active nation.

The initiative, called ‘Simply Judo Connects’ came to light when one of the Head Coaches Mark Montgomery was visited by refugee children at his fire station in Belfast.

“I saw these kids visiting the station and looking around and I thought our club could do something to help these families, and myself and our other Head Coach Scott Mayne put our heads together.  After a few weeks of asking around I found out they went to a school in West Belfast, St Paul’s Primary School. It turned out that the Headmaster’s daughter did judo, and I taught her, so he was very helpful.”

The initiative sees 60 children, 30 from refugee families and another 30 from local families, taking part in two classes every Monday evening with the sessions split between Key Stage 1 and Key Stage 2 age pupils. The sessions are run by Head Coaches Mark Montgomery & Scott Mayne with help from three other coaches Alan Kerr, Ryan Mawhinney & Joe Millar.

“We are delighted through support from SportNI that our Refugee Integration Project has been so successful over the past year. It is helping refugee families to connect within their new community, helping children build new friendships and confidence doing Judo.”

“It is our hope that in becoming a finalist in the UK Coaching Awards, it will give the project exposure and gain further support to enable the success to continue.”

After a record amount of nominations for the 2017 event, the ceremony will place at the Honourable Artillery Company, London on Thursday 30 November.

GB Judo Preview: 2017 U23 European Championships Scroll to top
Select the fields to be shown. Others will be hidden. Drag and drop to rearrange the order.
Click outside to hide the compare bar
Compare