You are here: Home / Events / Seventh for Sally Conway at 2018 Worlds in Baku 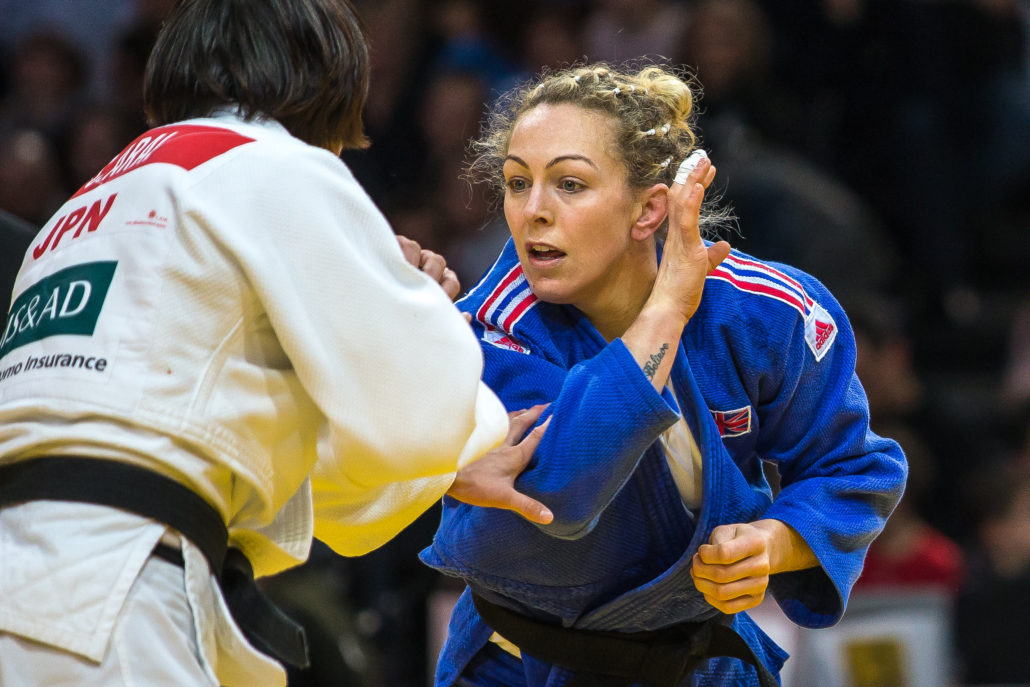 The British judoka had been in great form this year with five medals in as many competitions including gold at the Paris Grand Slam and silver at the European Judo Championships in Tel Aviv.

Her results this year also ensured that she would go in among the top eight seeds but she had a tricky first contest against former WRL Top Ten judoka Elvismar Rodriguez (VEN).

The Venezuelan judoka made a fast and physical start and Conway was forced into picking up a shido for a false attack.

The contest continued in a similar vein with Rodriguez pressuring Conway and with little under 30 seconds to go the British fighter got a second shido, this time for defensive posture.

In the dying moments of the contest Conway threw Rodriguez for waza-ari with just four seconds left on the clock with a nice sacrifice technique.

Her third round contest against Megan Fletcher (IRE) was another close one as both judoka, who know each other well, found it hard to really dominate.

Conway was the more positive fighter and had the better attacks but the contest went into golden score with both judoka picking up a shido for stepping out of the area.

Conway continued to attack and soon forced Fletcher into a second shido, with the Irish judoka penalised for passivity.

Eventually with over two minutes gone in golden score Conway was able to throw Fletcher for waza-ari and book her place in the quarter-finals.

WRL 2 Marie Eve Gahie (FRA) was next up and the French judoka looked strong from the start as she went ahead by waza-ari in the opening minute.

Gahie continued to work in newaza from the throw and eventually secured osaekomi.

This dropped Conway into the repechage final against Japan’s Yoko Ono. The Japanese made a first start, but Conway grew into the fight and had her chances in both tachiwaza and newaza.

For second time today Conway went into golden score but with little under a minute gone Ono was able to throw the British fighter for waza-ari with uchi-mata.

“I gave everything I possibly could on that fight because to fight for a chance of a World medal would have been amazing but I can’t complain, I did leave everything on the mat.

“I did feel confident, I felt like I was capable of winning a medal here at the World Championships but again, before you think about the medals you just have to take one fight at a time and just focus on each performance.”

Fellow -70kg judoka Gemma Howell was also in action today. The Wolverhampton fighter had a knee operation, six weeks ahead of the Worlds and had worked hard to get back on the mat in time.

She took on Gabon’s Karene Agono Wora in the first round and held up well against her physical opponent.

With just over a minute gone Howell went ahead by waza-ari and did well to stay in control of the contest from there to move into the second round.

Defending World Champion Chizuru Arai (JPN) was next up and the British judoka had beaten Arai the last time these two fought at the Hohhot Grand Prix.

Arai looked determined to make up for that defeat and the British judoka found herself two passivity shidos down in the final minute.

The second shido appeared particularly harsh as Howell had been looking to attack.

Straight after getting that second shido, Howell was throw for waza-ari and held down in osaekomi by the Japanese judoka, meaning she exited in the second round in Baku.

Max Stewart was making only his fourth international appearance of 2018 following an ankle injury in late 2017.

The Birmingham judoka had Victor Ahavior (GHA) first up in the second round and Stewart had little trouble in outgripping his opponent.

He soon forced Ahiavor into picking up three shidos for avoiding the grip.

The third round would be against 2017 World silver medallist Mikail Ozerler (TUR) and it was tactical contest that the Turkish fighter was shading on attacks.

Stewart found himself two shidos to one down as the fight entered its final moments and Ozerler was able to take a waza-ari lead with just 13 seconds to go.

Tomorrow will be the turn of -78kg judoka Natalie Powell and Jemima Yeats-Brown.

Get Involved This SportsAid Week with the #MyMiles Challenge!

Fifth on Worlds debut for Jemima Yeats-Brown Scroll to top
Select the fields to be shown. Others will be hidden. Drag and drop to rearrange the order.
Click outside to hide the compare bar
Compare