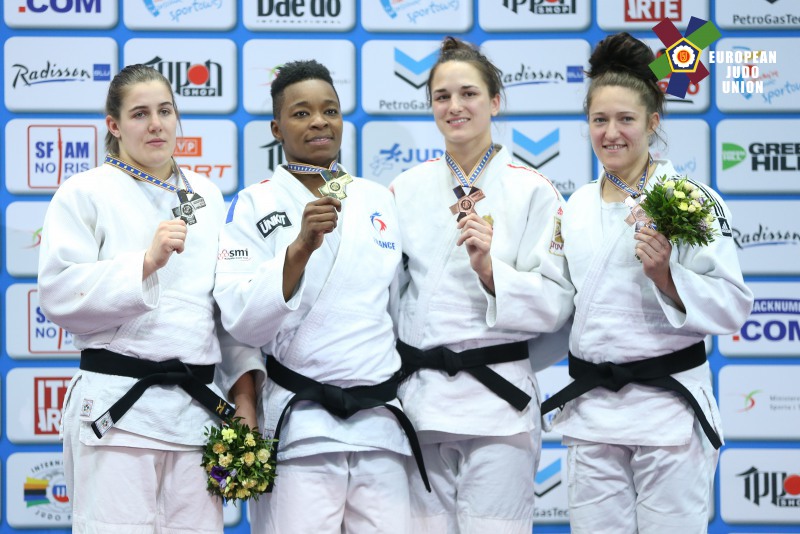 Natalie Powell picked up the second European medal of her career to date as she took home bronze at the 2017 European Judo Championships in Warsaw, Poland on Sunday 22 April.

The Welsh judoka took on Karen Stevenson of the Netherlands in the bronze medal match and it was fairly even contest for the most part. However, with little over 90 seconds left Powell threw Stevenson for ippon to end up on the medal rostrum for the second year running.

Powell started her day as one of the top seeds at -78kg and backed that up to dominate home judoka Beata Pacut in the first round. Pacut wasn’t able to match Powell and picked up three shidos in regulation time to lose the contest. Slovenia’s Klara Apotekar was next up and against Powell showed her class to throw her opponent for waza-ari twice and booked her place in the semi-finals.

World No.1 Guusje Steenhuis (NED) was her opponent in semi-final and the Dutch judoka backed up her ranking as she controlled matters from the start. Powell was unable to get into the contest and could not prevent Steenhuis from throwing her for ippon.

Speaking after her collecting her medal, Powell said:

“Today it felt good to get back on the mat and compete. My preparation has not been great (due to injury) but I am pleased to get on the rostrum and deliver a good performance. I feel I’ve got a lot to work on and develop in the coming months but I’m excited for the challenges ahead. I will be concentrating now on the Worlds in August.”

“Natalie showed how to dig in today after her semi-final loss and there was no way she was going home without a medal. She has shown true consistency at this level to win her second European bronze.”

Max Stewart (-90kg) and Ben Fletcher (-100kg) were also in action today as the individual competition in Warsaw wound down. Stewart came through a scrappy opening contest with Turkey’s Batuhan Efemgil, scoring a waza-ari in golden score with a nice piece of ashi-waza to win it. However, he lost out in golden score in his Last 16 contest to Kristofer Klen Kaljulaid (EST) with the Estonian rolling Stewart for waza-ari, in another scrappy contest.

Ben Fletcher (-100kg) took on Swedish judoka Joakim Dvarby in his first contest of the day and found himself a waza-ari down early on. Fletcher was able to pull that back though to level things up before pulling off a lovely throw at the death for ippon to move into the Last 16.

The Team Bath judoka next took on Rio 2016 silver medallist Varlam Liparteliani (GEO) in the Last 16 with the Georgian having moved up from -90kg at the start of the year. This fight followed a similar pattern though this time the British judoka went ahead before being pulled back. With just five seconds left on the clock Liparteliani sealed the contest with a big throw of his own to knock Fletcher out of the competition.

Reflecting on the competition Howey said:

“On the whole the team have performed well and the youngsters have shown some good potential. To come away with two medals and two seventh places is good at this level and this early on in the road to Tokyo 2020.”

Ever Thought About Becoming A Judo Coach? Scroll to top
Select the fields to be shown. Others will be hidden. Drag and drop to rearrange the order.
Click outside to hide the compare bar
Compare