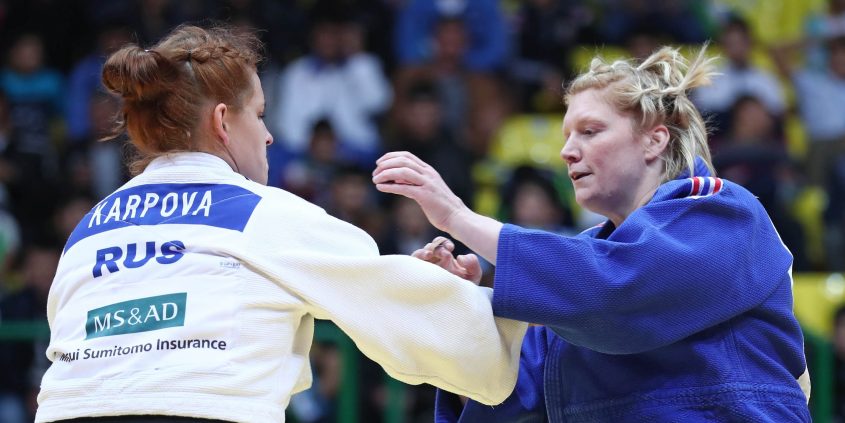 Sarah Adlington won GB Judo’s third medal of the weekend at The Hague Grand Prix in the Netherlands in the final Grand Prix of 2017.

Following on from Ashley McKenzie and Alice Schlesinger’s silver medals picked up on Friday and Saturday, the Scottish judoka received a bye into the Quarter Finals. She took to the mat against Russia’s Aleksandra Khomyn in a contest that was scored in Adlington’s favour as she forced her opponent to pick up three shidos and secure her place into the semi finals.

She came up against a tough opponent in the form of Lithuania’s Sandra Jablonskyte as she looked to reach the final. A single waza-ari was enough to see off the Adlington charge and drop her into the bronze medal contest.

Russia’s Daria Karpova stood in the way of Adlington’s third Grand Prix medal of the season. The bronze medal contested followed a similar pattern to that of the Quarter Final as Adlington used her size advantage to bully Karpova around the mat. Three shidos again the difference between the two as she added to her medal collection.

Jamal Petgrave (-90kg)’s Grand Prix debut ended in disappointment as he fell to in-form Polish judoka Rafal Kozlowski. Kozlowski scored an early waza-ari against Petgrave and used his experience to keep the young Brit at bay as time expired.

Frazer Chamberlain (-90kg) looked impressive in the first round as he comfortably saw off Italy’s Walter Facente. He clocked up four waza-aris throughout the contest as he kept the scoreboard ticking over. He eventually finished the contest in the final minute with an ippon finish. It wasn’t to be in the second round however, as he fell to Spain’s Nikoloz Sherazadishvili. A single waza-ari was enough to end Chamberlain’s run at the competition.

Elsewhere on the mat, it was a first round exit for Rachel and Sally Moon in the -78kg category at the hands of Anastasiya Dmitrieva (RUS) and Luise Malzahn (GER).

2017 Pre-Cadet and Cadet British Championships – Entry List Available Scroll to top
Select the fields to be shown. Others will be hidden. Drag and drop to rearrange the order.
Click outside to hide the compare bar
Compare