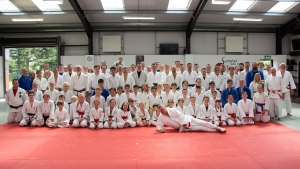 The Samurai Judo Club’s annual get-together is always a special day, but much more so this year as the club celebrated their 40th anniversary.

A hundred players of all ages from six to seventy were on the mat at the club’s purpose-built premises in Zortech Avenue, Kidderminster, including 40 dan grades and six sixth dans.

This year the Samurai were able to announce that a fourth full member of the club had been awarded the grade of 6th dan. Roy Muller, now aged 72 and still training hard, has been a member of the club for nearly 30 years, Already a quality player of many years standing, having started judo in the 1960s, during his time at the club he has won many medals, but most memorably took the silver medal in the 2004 World Veteran Masters Championships in America, and also the bronze in the open category despite only being a lightweight. Currently he is one of nine Samurai players so far who will be competing in the Commonwealth Tournament at the end of September and so is training for that. 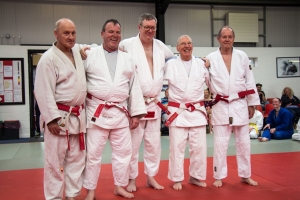 Founded in 1979 by Andrew Haffner, who remains Head Coach to this day, the Samurai club has become one of Worcestershire’s most successful sports clubs, having won the Wyre Forest Sports Club Of The Year a record ten times. In judo circles, the club’s achievements are even more renowned: they have won over 10,000 medals in that 40 years, produced over a hundred black belts, over 60 British Champions (excluding team and limited events such as British Universities, which would almost double the total), 12 British Kata Champions, three Commonwealth Champions, 14 World Veterans medallists, 12 European Cadet Cup medals (or their forerunners), two Junior European Cup medals and two Senior European Cup medals. Three of those last four were won by Kate Walker, the club’s most successful player, who also finished 7th four times at the Junior European and European U23 Championships, came 9th at the Japan Grand Slam in Tokyo and was twice reserve for the Olympics. Two former members of the club, Kelly Edwards and Danny Williams, both competed in the London 2012 Olympics. The club has won medals on every continent of the planet except Antartica, where no judo events have ever been held!

They have also won medals at the British National Championships every year for the last 20 years, something that very few clubs have done.

In other fields of judo the club is even more successful. They have had five Competition Controllers, the top grade of competition organizers, and numerous Senior Recorders, of which eight were present at the get-together. The club also has two EJU Continental referees, with two more former members also reaching international level, and has produced many other referees as well. 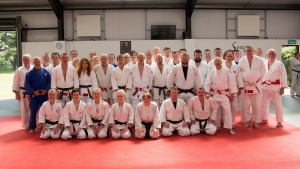 In 2012 the club moved into a permanent, purpose built facility in Zortech Avenue, which they built themselves at a cost approaching half a million pounds. The club owns both the building and the land it stands on. The current membership is just over 140, of which about half are adult and half junior, approximately 60% male and 40% female. 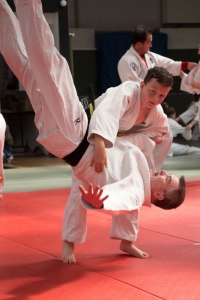 Another surprise presentation on the day was a Gold Star Award to Olivia Turner. The club runs an internal star award scheme and the three top awards, bronze, silver and gold, are extremely demanding, requiring an impressive range of skills, including an informal pass at 5th dan theory, Area Referee and Contest Recorder qualifications, three full katas and numerous other requirements. Only five Gold Star Awards have ever been awarded by the club and three of the recipients, Martin Whiteside, Ben Newbury and Kate Walker were on hand to present Olivia’s to her.

It being the club’s 40th anniversary, a special set of awards were commissioned for “Great Moments in the Club’s History” and many members from years ago who were present received such awards. There are members from all of the decades of the club who attend the event each year, but this year’s attendance was the largest to date. And most of those players were not only there but on the mat having a go!

TEAM ANNOUNCEMENT: 14-strong team set for World Championships, Tokyo, Japan Scroll to top
Select the fields to be shown. Others will be hidden. Drag and drop to rearrange the order.
Click outside to hide the compare bar
Compare