You are here: Home / Association news / Sally Conway Adds Another Grand Prix Bronze Medal to her Collection in... 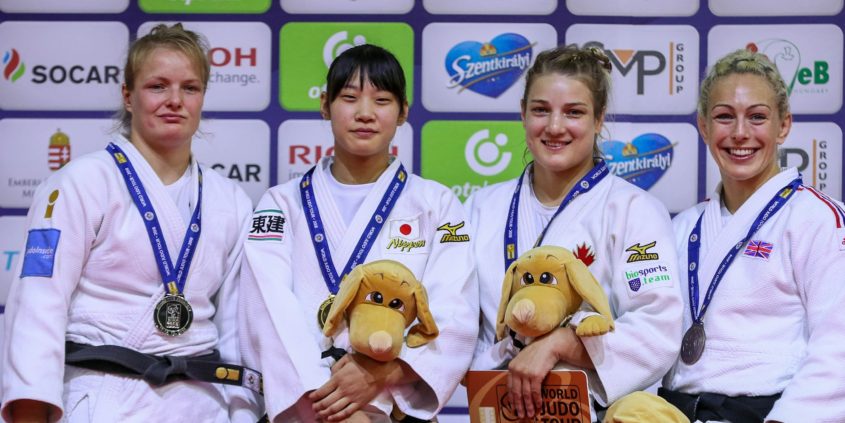 Sally Conway claimed another Grand Prix medal as she won a Bronze medal on the second day of competition at the Budapest Grand Prix.

Following Chelsie Giles Bronze medal yesterday, Conway displayed an accomplished day of judo on the mat in the -70kg competition, defeating a number of higher ranked opponents on the day.

The World No.7 Assmaa Niang stood in Conway’s path in the Bronze medal contest but she would prove no match for her newaza skills as forced Niang to submit to an arm lock.

Conway’s trademark newaza came to the fore throughout the day once again as she made multiple opponents submit to her sublime skill on the mat.

Her opening round opponents, Australia’s Aoife Coughlan and Russia’s Alena Propkopenko both suffered the same fate as fast thinking from Conway saw her spot the opening and secure an arm lock to see them submit. 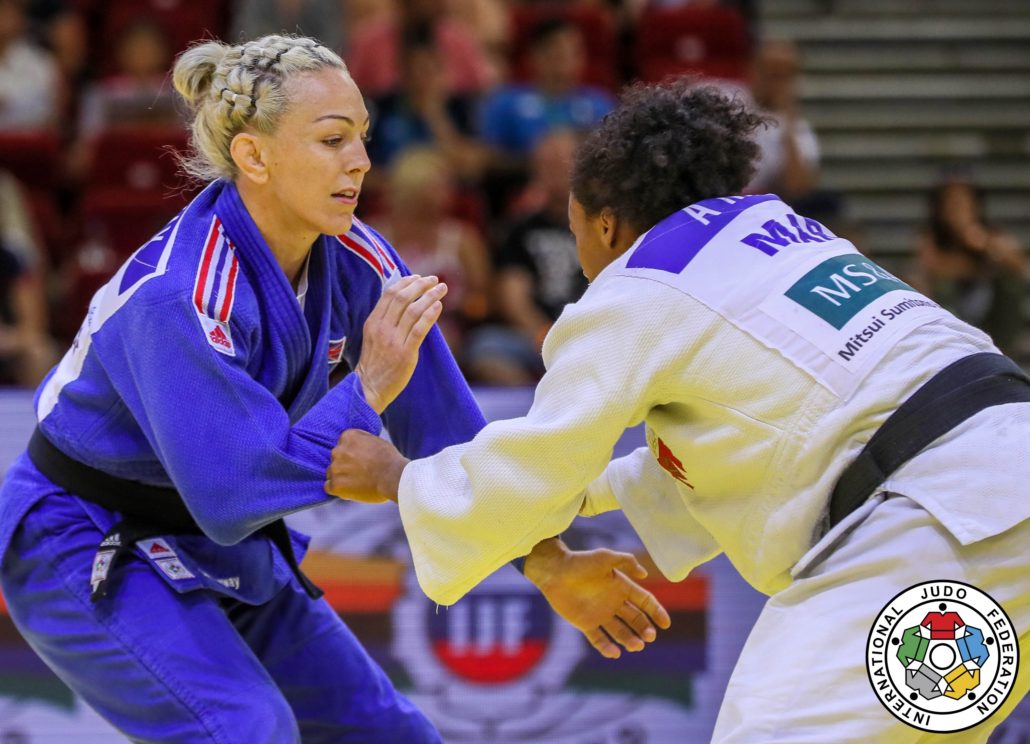 The later stages of the competition saw Conway face some stiff competition starting in the Semi Finals as she came up against World No.9 Maria Perez (PUR). The two had met three times in competition with Conway winning their previous contest on her way to winning the Paris Grand Slam earlier this year.

It was an even contest up until the half way stage as again Conway spotted an opening and countered an attempted Perez throw to secure an arm lock to leave Perez frustrated on the mat.

She came unstuck in the Semi Final against Japan’s Saki Niizoe with the Japanese athlete throwing Conway in the first minute to set up the Bronze medal contest.

Alice Schlesinger enjoyed a solid day on the mat as she claimed 7th place in the competitive -63kg competition.

In her first appearance on the mat since the European Championships earlier this year, Schlesinger immediately looked at home on the mat as she brushed aside Tina Zeltner (AUT) and Lia Ludvik (SLO) in her opening round contests.

Danny Williams (-73kg) faced some long contests throughout his stay in the -73 kg competition with his first two contests entering Golden Score. A waza-ari score was enough to see off his opening round opponent Oleg Babgoev from Russia before an arm lock saw off Khusiddin Karimov (UZB). He would eventually come unstuck against Romania’s Alexandru Raicu in the third round as he found himself pinned to the mat for the count.

There was first round disappointment for Lubjana Piovesana (-63kg) as she was eliminated in the second round following a bye in the opening round. She came up against the WRL 10 Madalena Krrsakova from Austria, who claimed gold at the Antalya Grand Prix earlier this year. An early waza-ari from Krssakova was enough to see off the late challenge of Piovesana.

Natalie Powell Claims 10th Grand Prix Bronze Medal of Her Career in Budapes... Scroll to top
Select the fields to be shown. Others will be hidden. Drag and drop to rearrange the order.
Click outside to hide the compare bar
Compare
Wishlist 0
Open wishlist page Continue shopping