You are here: Home / Association news / “Lucky Thirteen” Medals for GB’s Veterans at the World... 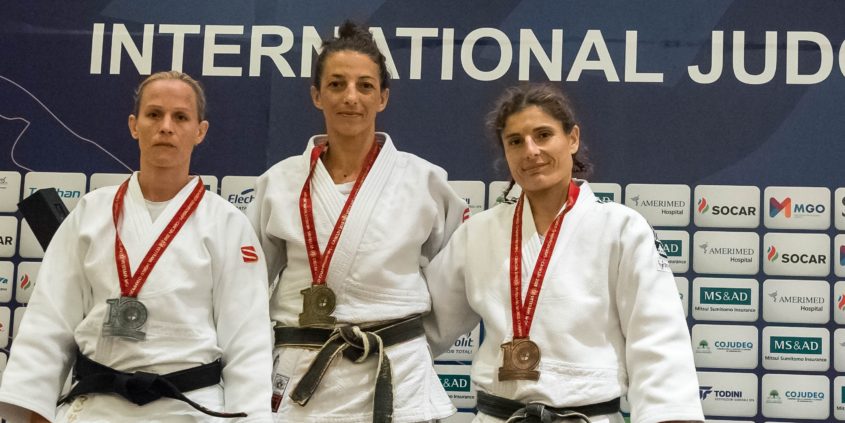 An excellent 13 medals won through the competition saw GB finish in 25th place on the medal table in Mexico. A host of familiar names from Glasgow returned to the mat as they looked to keep up the momentum built by the squad after competing in front of a home crowd. It was a superb final couple of days for the female squad with them scooping an incredible eight medals!

Fiona Chan started the weekend brightly for the squad with a hard-earned bronze medal in the F3 -57kg competition, dropping only one contest all day!

Reigning champion Samantha Chraniuk added another World medal to her collection with a Silver medal in the F2 -63kg competition. She progressed well throughout the day, eliminating some good opposition along the way.

Natasha Glassford finished in fifth place in Glasgow, but she was able to go even better in Cancun with a silver medal in the F1 -63kg. Two ippon finishes was enough to see her finish in second place.

Caroline Rawlings dropped just one contest in her Round Robin competition as part of the F2 -52kg. Brazil’s Lilian Terada proved to be the only obstacle on an otherwise excellent competition from Rawlings.

European Championships Silver medallist Laura Scarlett-McAllister claimed bronze in the F4 +78kg competition. She claimed two wins out of four in the competition including a solid ippon victory over Brazil’s Rogeria Silva in her final contest was enough to see her fight her way onto the podium.

Debra Small won bronze in the F4 -52kg category with the highlight of her day including a opening ippon victory over Rosane Andrea-Matteo (BRA).

Perennial medallists Terrence Watt and Joyce Malley added further World Veteran Championships medal to their increasing collection with a silver and bronze medal respectively in the M9 -90kg and F6 -63kg competition. Malley recovered superbly from dropping the first contest of the day to claim the bronze while Watt fought excellently throughout the day three ippon finishes to finish second on the podium.

European Champion James Hornsby wasn’t able to claim a European-World double as he finished in silver position in the M3 -81kg competition. Hornsby looked in great touch throughout the day as he progressed through the rounds before coming up against Russia’s Alexander Konovalov in the Final.

Simon Child replicated his result from Glasgow with another bronze medal on the World circuit. Child overcame semi final disappointment to claim victory in the Bronze medal contest against Brazil’s Vinicius Jerschow in the M3 -90kg.

Kyle Perry won bronze in the M1 -66kg competition with a superb win in the medal contest following victory over Brazil’s Hakson Andrade.

Giorgi Vazagashvili to support WCPP judoka Scroll to top
Select the fields to be shown. Others will be hidden. Drag and drop to rearrange the order.
Click outside to hide the compare bar
Compare