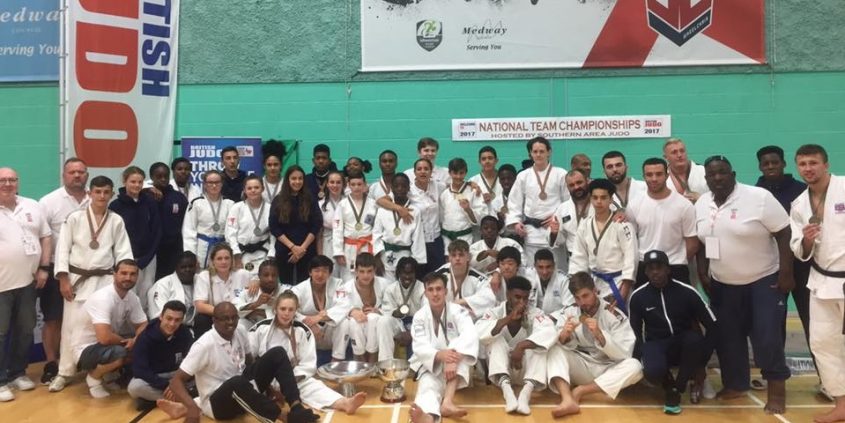 London and Scotland once again proved that they are the best of British as they claimed five Gold medals out of six at the National Team Championships held at Medway Park Judo Club, Kent over the weekend. The Northern Home Counties were able to regain their title in the Women’s competition as they pushed Scotland into silver medal position.

The British National Team Championships is always a hotly contested day of judo with fierce geographical rivalries from eight of the BJA areas as well as JudoScotland and a team of UK Armed Forces.

Brian Jacks was on hand to kindly hand out medals throughout the day and happily posed for photographs.

Rio Olympian Ashley McKenzie led the way for the Men’s London team in the -66kg category , progressing through the day undefeated as London got the better of Scotland, who were looking for a seventh straight title. It was a closely fought final with London taking the contest 3-2 in results to claim the crown. McKenzie and team mates Aaron Turner (-73) and Frazer Chamberlain (+90kg) all won their contests whilst Aidan Moffat (-81kg) and Reece Calder (-90kg) ensured a nail-biting finish.

The Northern Home Counties (NHC) claimed the Women’s title to stave off a London and Scotland clean sweep of the Gold medals. They ended the day with a single defeat overall, losing their first contest of the day to defending champions Midlands in the group stages before recovering strongly to defeat the Combined Services 4-1 before handing Scotland a 4-1 defeat in the final. It was all over by the time Emma Reid (+70kg) to the mat following victories for Kiera Bateman (-57kg), Olivia Spellman (-63kg) and Chloe Nunn (-70kg) in the first four contests of the final, three of those coming via an ippon victory. Yasmin Gordon (-52kg) was able to claim a consolation victory for the team.

It was a clean sweep of the Cadet competitions for Scotland as both the boys and girls were able to defeat the South and London respectively to win their 2nd and 3rd Gold medals of the day. The Midlands won bronze medals in both of the Cadet categories. Scotland finished in the runners up position in their pool stages following victories over the East and NHC but stumbled against the South as they succumbed to a 5-2 defeat overall. They would get their revenge in the final though with a hard-fought 4-3 victory over their rivals to claim Gold. Despite Euann Mightens (-50kg) losing the first contest via ippon, Cameron Foster (-55kg) and Joe Lynch (-66kg) were able to level the contest at 2-2 in between a Dylan Munro defeat to Kaito Wilson (-60kg). Two impressive victories for Lewis Mark (-73kg) and Chris Kumescu-Egri (-81kg) secured the win for the Scots before Jay Proctor’s defeat to Jack Jenman in the +81kg category.

Scotland’s female Cadets followed suit as they took home Gold by beating London in the Final. It was an impressive day of judo from the squad as they brushed aside each opponent to remain undefeated throughout the day, winning the final by 4 contests win to 1 with the only blemish being a defeat for Emma Carroll in the -63kg category.

It was again a London and Scotland Gold medal combination in the Pre-Cadet competition as London took home the Boy’s title with Scotland claiming the Girl’s. London were able to call upon a strong squad with the likes of George Holland (-38kg), Dinari Dawkins (-46kg) and Mario Moore (-60kg) all taking to the mat and claiming victories throughout the day. It was an impressive performance for the squad in the final as they won 5-2 against the NHC with two ippon victories coming from Holland and Nikita Petrak (-55kg).

On the girls side, Scotland saw off the South with a narrow 3-2 victory in the final. The Scots claimed the first three rubbers of the contest to effectively end the contest with Michaela Sweeten (-44kg), Hannah Wilson (-48kg) and Katelyn Cox (-52kg) all winning their matches before Lucy Slape (-57kg) and Roxanne Proctor (+57kg) made the scoreline respectable with victories in the final two contests.

Paul Sexton, Tournament Director said “The Southern Area wish to thank all those who contributed to an amazing day and congratulations not only to the winning medallists but all players and coaches for their commitment to the event.

A special mention should also be made to friends and families of Jean McNaughton and Roy Luff, two long serving officials for the BJA, who sadly passed this year. Two new awards for the Pre-Cadet girls and boys were purchased and named in their memory. The event was not a memorial but a celebration of what they brought to British Judo and the love and respect that we have for them as individuals.”

Social Media Round-up: 26 June – 02 July 2017 Scroll to top
Select the fields to be shown. Others will be hidden. Drag and drop to rearrange the order.
Click outside to hide the compare bar
Compare