You are here: Home / Association news / Judo Moves to Stamp Out Bad Behaviour 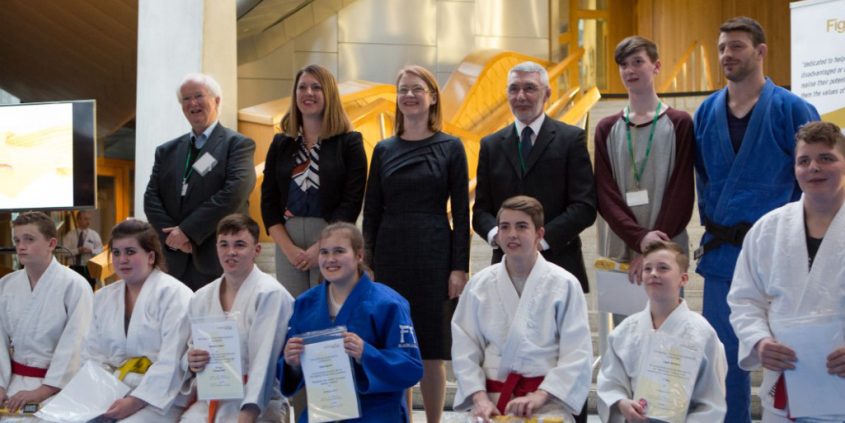 Fighting Chance Scotland has recently been heralded in Scotland for it’s work teaching judo to school pupils with behavioural and additional support needs has been hailed at Holyrood.

Fighting Chance Scotland, established by co-founders Jim Feenan and Charlie Watt in 2014, aims to give an opportunity to learn new skills to young students who: are disengaged, socially isolated, lack positive role models or have low self-esteem; are victims of neglect, crime or bullying; may engage in antisocial behaviour or be at risk of being excluded from education.

The hope is it will translate to better performance in the classroom and Mr Feenan, who delivers one of three pilot projects at Woodmill High School, said the results from up to 200 youngsters taking part show improvement across a number of areas, including relationship building and less classroom disruption and aggression towards teachers and fellow pupils.

Jim said: “We were delighted to be given the opportunity to showcase Fighting Chance and we’re very grateful for the support of Shirley-Anne Somerville as our local MSP and Jenny Gilruth MSP for Glenrothes.

“By stressing the importance of the judo values and adapting coaching methods to suit the group’s need we are able to demonstrate the effectiveness of judo as an intervention that can result in positive change back in the classroom with outcomes and improvements seen in their academic abilities, relationships and in their general fitness, health and wellbeing.”

With over 60 guests, MSPs and government officials in attendance, it was a fantastic evening but the stars had to be the young people from Woodmill, Glenwood and Larbert high schools, who demonstrated their new found skills and confidence in themselves.

“It is important that the aims of the charity align closely to that of the governing body for judo in Scotland and as such we have a memo of understanding between the two organisations. Our original idea for the Yellow Belt Challenge was to help young people come into the clubs but what has proven more effective is to take judo directly into the schools during the school day.

“Not only do the young people engage in a new physical activity but through time we see a change in their attitude and approach.

“We are particularly keen to help improve their academic outcomes as well as improve their relationships with teachers and peers and in their overall fitness, general health and wellbeing.”

Ms Somerville said: “I am delighted that Fighting Chance could come to parliament to speak to MSPs about their excellent work to improve attainment in Dunfermline, and right across Scotland.

“I originally met with project director Jim Feenan last year, and upon hearing the great work that Fighting Chance do, and I was determined to give them as much support as possible.

She added: “Fighting Chance’s most notable success is the ‘Yellow Belt Challenge’. As part of it, over 170 young people have taken part in pilot projects in Dunfermline, Glenrothes, and Larbert. I’m grateful for the vital work they are undertaking and I’ll continue to offer Jim my full support as his organisation goes from strength to strength.”

Fighting Chance deliver programmes to pupils with conditions such as autism, Down’s Syndrome, ADHD and tourettes, and the ‘Yellow Belt Challenge’ allows them to achieve a recognised judo standard.

AASE Programme Returns for 2017-2018 Scroll to top
Select the fields to be shown. Others will be hidden. Drag and drop to rearrange the order.
Click outside to hide the compare bar
Compare