Huge thanks to Simon Ward for the below report

It was a real pleasure to welcome well over 100 young Judo athletes to the 8th John Davies Western Area International Summer Training Camp.

This year we also had the honour of hosting the England Judo Programme as part of our continuously increasing and unique camp in Bideford, North Devon.

We welcomed Judoka representing 47 different clubs from across England, Wales, Northern Ireland, Ireland, France and Spain. Some of these brilliant young judokas had just recently returned from competing at the European Cadet Championships in Lithuania or the Commonwealth Youth Games tournament in the Bahamas. With the ability levels so varied it was a credit to everyone who took part, and with children as young as 10 to 19 years old everyone played a part in inspiring each other and raising their training levels to an astonishing high.

Double Olympian Colin Oates passed on his knowledge and expertise 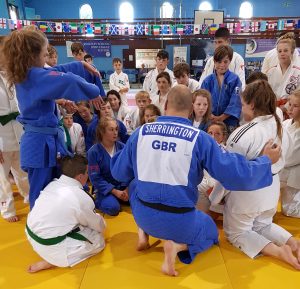 The England Cadet Coaching team led by Jason Parsons and Nicole Nunn, who had just returned from the Commonwealth Youth Games in the Bahamas with the England team, led some technical and Randori training sessions.

We also appreciated support from a team of dedicated visiting Coaches including Gary Jackson, Peter Blood, Steve Clarke, Alex Paske, Shaun Mitchell, Peter Iturevsky, Gary Gregory and Darren Haynes who all gave much valued time to assist the led coaches and all the young judoka.

During the five days of training the group where really pushed to the limit of their physical and physiological limits within the training environment. The camp expertly strikes a perfect balance between tough, serious level judo and fun activities, as this keeps the participants motivated and focused on improving their performance through rich experience of practise and learning from the experts and each other.

Some of the best moments during the camp are best captured as the week progresses as new friendships are formed and old rivalry becomes a distant old memory.

The camps mix of hard judo and fun visits to our activities including the Water Wipe out assault course, high ropes climbing at the Ultimate High Adventure Centre and making use of the North Devon Coastline for Surfing is yet another fantastic way the camp creates so many special memories for our visitors.

Congratulations to all our team of Judoka and Coaches this year. You have all played a remarkable role in creating and delivering an outstanding few days of Judo, which so many have enjoyed and developed in strength and character.

Future stars celebrated at inaugural TASS athlete awards Scroll to top
Select the fields to be shown. Others will be hidden. Drag and drop to rearrange the order.
Click outside to hide the compare bar
Compare