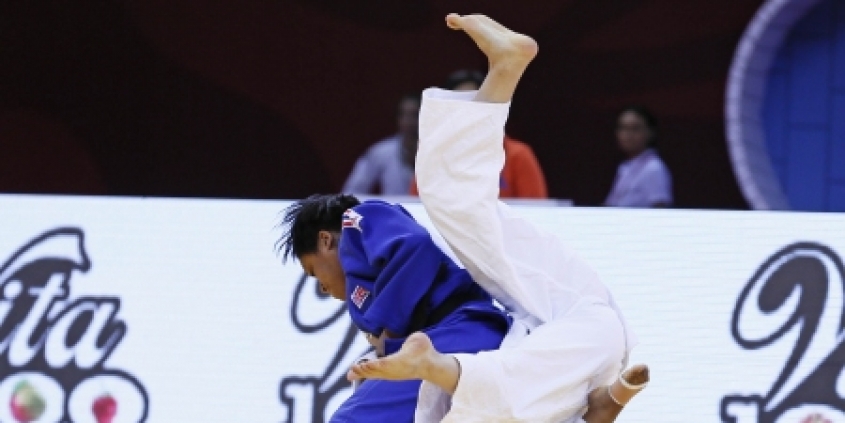 Nekoda Davis picked up the second Grand Slam medal of her career as she took home silver from the Baku Grand Slam on Friday 6 May while Ashley McKenzie produced some excellent attacking judo to pick up bronze in a strong field.

This was Davis’s third medal of the year and secured her another 300 qualifying points for the Rio Olympic Games this summer with just under a month of qualifying left. She came through a solid opening contest with Arleta Podolak (POL) with the contest coming down to shidos. Davis forced her opponent to pick up two before holding off a late surge to take the win.

Sabrian Filzmoser (AUT) was her quarter-final opponent and the British judoka went behind by shido to the tall Austrian however she showed her ability to score no matter the time as she threw Filzmoser for yuko in the final ten seconds of the contest.

The semi-final with China’s Tongjuan Lu was a more straightforward contest as the British judoka threw her opponent for ippon in the first ten seconds to book her place in the final for the second year running.

Her opponent in the final was the impressive young Japanese judoka Tsukasa Yoshida (JPN) who won both the Tyumen and Tokyo Grand Slams in 2015. Davis was unable to execute her attacks as the Japanese judoka scored three times with a waza-ari and two yukos to take the contest and the gold medal.

Speaking afterwards Nekoda Davis was pleased with her overall performance on the day: “I am happy with my performance and with this medal I am edging towards being seeded at Rio. This sets me up nicely for the Masters in a few weeks and the end of a long qualification cycle.”

Elite Performance Coach Kate Howey, MBE said: “Nekoda fought well today and again showed she is improving and throwing big. This moves her up the Olympic rankings and with just the Masters left for she should be in a good position going into Rio.”

McKenzie put together his best performance since the Tyumen Grand Slam last year and in the process added 200 points to his qualifying total. He got off to a dominant start against Finland’s Juho Reinvall as he scored for waza-ari and yuko before completing the set with an ippon score. Local boy Vugar Shirinli (AZE) was his next opponent and it proved to be a more tactical affair as both judoka picked up three shidos as the contest went into golden score.

However McKenzie ensured the contest went his way as he threw his opponent for waza-ari which set-up a last 16 match-up with London 2012 bronze medallist Felipe Kitadai (BRA). The British judoka scored early to go ahead by waza-ari before the Brazilian came back with a yuko score of his own.

However with Kitadai pressing it was McKenzie who countered superbly to throw his opponent for ippon and secure a place in the last eight.

The British judoka took on Mongolia’s Boldbaatar Ganbat for a place in the semi-final however the former World Champion proved to be too strong as he threw McKenzie for waza-ari twice to take the win.

Going into the repechage McKenzie was faced with his second Brazilian opponent of the day in Eric Takabatake (BRA) and the British judoka went behind by two shidos before producing a lovely bit of skill to throw Takabatake for waza-ari in the final minute.

The bronze medal contest was a close fought thing against Amartuvshin Dashdavaa (MGL) as the two men couldn’t be separated by the end of normal time as both judoka picked up two shidos. Going into the golden score McKenzie’s superior conditioning told as his high attack rate saw the Mongolian wound up for passivity giving McKenzie the win.

Colin Oates (-66kg) was also in action however he was beaten by Denis Vieru (MDA) as the younger judoka threw for waza-ari twice in the opening two minutes.

Saturday sees Alice Schlesinger (-63kg), Sally Conway (-70kg) and Owen Livesey (-81kg) step on the tatami from 0700 GMT. You can watch all the live action on ippon.tv and follow @BritishJudo on Twitter for live updates

Busy weekend for Cadets and Juniors

Baku gold for Alice Schlesinger Scroll to top
Select the fields to be shown. Others will be hidden. Drag and drop to rearrange the order.
Click outside to hide the compare bar
Compare