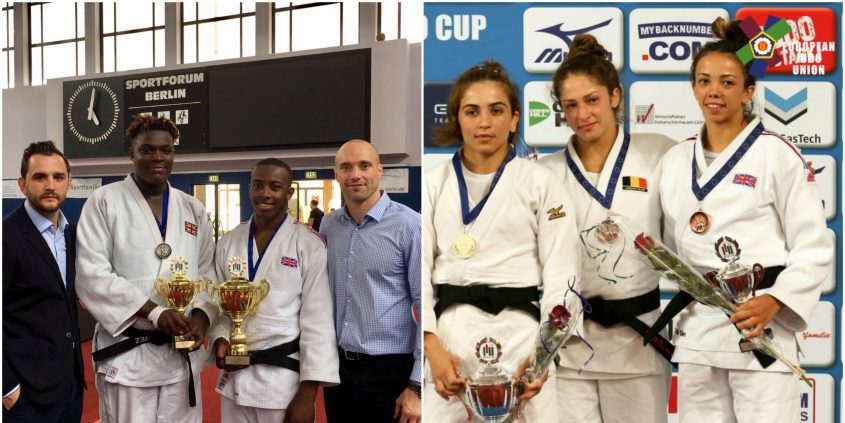 On a weekend with no senior competition planned ahead of the World Championships in August, the Junior squad took the chance to shine as they won a Gold, Silver and Bronze medal across the weekend at the Berlin Junior European Cup in Germany.

The highlight of the weekend saw Jamal Petgrave (-90kg) continue his impressive junior career by adding Gold to his increasingly illustrious CV.

A notable victory against World No.3 Jakub Ozimek from Poland saw Petgrave top his Pool and set up a semi final against Hungary’s Apor Toth. It was a fight that could have gone either way with both competitors being awarded two shidos each before Petgrave was able to score with a vital waza-ari to get the necessary score before the end of time.

He would face Giorgi Chikovani (GEO) in the Final. Chikovani is just making the transition into Junior-level judo following the step up from Cadets in which he won numerous medals in European competition. The 5 minute long final was tight with Petgrave picking up another two shidos before he was able to score an ippon finish to give him his second gold medal of the season.

The result has seen him rise up to World No.22 in the Junior rankings.

Wesley Greenidge (+100kg) is up to a career-best No.3 in the World following a silver medal in Germany.

Solid defensive skills from Greenidge saw his opponent struggle to get to grips with his style. As a result, he progressed through the opening three fights, causing his opponents to pick up a combined six shidos along the way! He would meet Amirani Tsikoridze from Georgia in the final.  Tsikoridze came with a game plan however and nullified Greenidge in the contest. He was able to score with a waza-ari before finishing the contest in style to take home gold as Greenidge claimed a well deserved silver medal.

He has now placed in his last five events picking up a gold medal and two silvers in the process.

Chelsie Giles began the weekend in fine style with a bronze medal on the Saturday in the -52kg category. In what is generally thought of as one of the most competitive junior competitions in the calendar, Giles displayed an excellent display of judo to breeze through the opening rounds without a single score against her.

She came up against Romania’s Cleonia Raciu in the semi final and the contest went the distance as the two judoka could not be separated. In the early stages of Golden Score, Giles found herself on the wrong end of an ippon finish as she dropped into the Bronze medal contest.

The tricky Junior World No.16 Amber Ryheul awaited Giles, but again she kept her opponent scoreless, causing Ryheul to pick up a shido before finishing the contest with 30 seconds left on the clock.

Iruka Judo Club Battles for Healthy Hearts! Scroll to top
Select the fields to be shown. Others will be hidden. Drag and drop to rearrange the order.
Click outside to hide the compare bar
Compare