The IJF World Tour shows no signs of slowing down as it heads into Uzbekistan this weekend for the Tashkent Grand Prix, with four British representatives due to take to the mat over the three days.

Sarah Adlington came away with GB’s sole medal at last year’s competition as she took home Bronze in the +78kg competition. She will again take to the mat in search of a medal to further boost her credentials in the race to qualify for the Tokyo Olympic Games.

It has been a tale of near misses for the Scot in recent competitions in two successive Fifth place finishes at the Cancun Grand Prix, and more impressively, the World Championships. She defeated a number of high quality opposition on her way to the placings, but she will be looking to go one better here in Uzbekistan.

She enters the competition as the World No.16 and seeded as No.5 for the weekend. Maryna Slutskaya from Belarus is the topped ranked judoka in the category but Adlington can take heart from the fact that she defeated her at the World Championships this year.

Adlington will take Israel’s Raz Herschko in the first round of the +78kg competition before a potential second round match against No.4 seeded Carolin Weiss (GER).

Following Alice Schlesinger’s later withdrawal, Amy Livesey will be GB’s sole representative in the -63kg competition. Livesey has recently broken into the World’s Top 20 in the division after Bronze medal victory over compatriot Lubjana Piovesana at the Cancun Grand Prix. It will be the sixth time we have seen Livesey on the mat this year and she has demonstrated that she can compete with the best with Seventh placed finishes in Tunis and Zagreb earlier this year to compliment a Silver medal at the Saarbrucken European Cup.

It looks to be a tough -63kg competition with Slovenia’s Andreja Leski the top seed, but with Katharina Haecker (AUS), Magdalena Krssakova (AUT) and Kathrin Unterwurzacher (AUT) all entered, this weight category could be the one to watch on Saturday!

Following a bye in the opening round, Livesey will await the winner between home judoka  Sanobar Sultonova and Maria Centracchio, both of who she has not met on the mat before.

Kim Renicks will kick off the action for GB Judo in the early hours of Friday morning as she enters the -48kg competition. She will be looking to put an end to a run of 5th placed finishes in Grand Prix events which has seen her finish Fifth in Tblisi, The Hague and Cancun dating back since 2017. A further fifth place at the Glasgow European Open this year will have given her confidence as she looks to fight her way into the medal positions this weekend.

She will tackle Russia’s Liliia Kiseleva in the first round of the competition.

Frazer Chamberlain (-90kg) was so close to a medal at the Cancun Grand Prix as he was narrowly defeated by Brazil’s Rafael Macedo in the Final Block, but fully deserved a medal on the day! Chamberlain showed impressive form as he defeated the likes of former World Champion Nemanja Majdov (also entered this weekend) and 2017 Abu Dhabi Bronze medallist Zachary Burt. Krisztian Toth enters the competition as the No.1 seed, with Chamberlain scheduled to take on Switzerland’s World No.27, Ciril Grossklaus in the opening round with a potential meeting with Toth in the Quarter Finals.

The action will begin at 6:00am (UK time) on all competition days. Follow live text commentary from all British competitors on our Twitter account, or catch all of the action LIVE on our homepage! 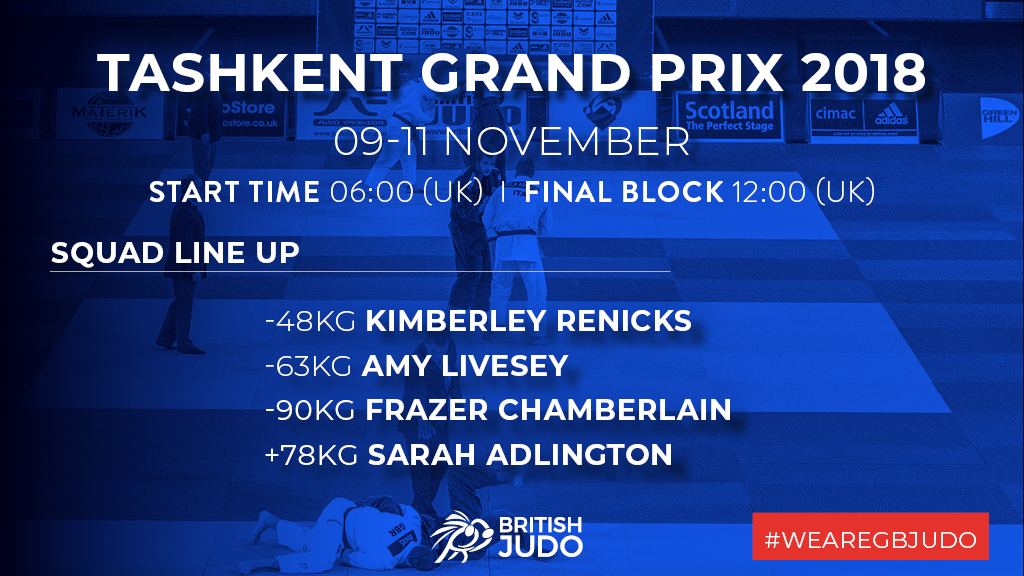 Kim Renicks Eliminated In Second Round at Tashkent Grand Prix Scroll to top
Select the fields to be shown. Others will be hidden. Drag and drop to rearrange the order.
Click outside to hide the compare bar
Compare