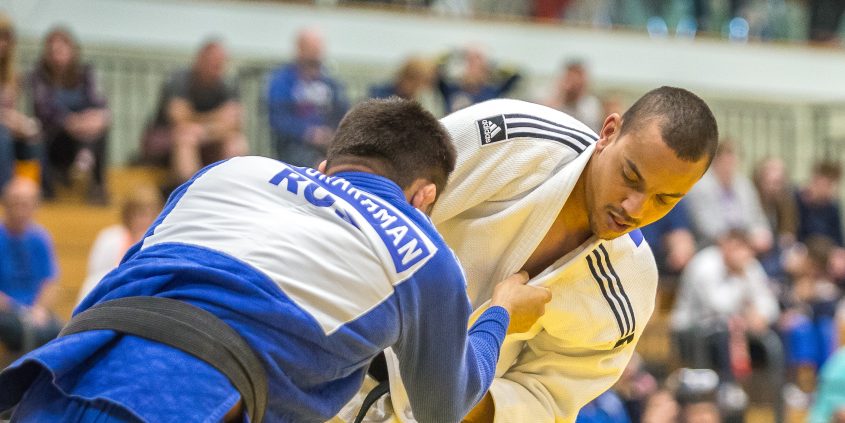 On a frantic final day of competition, Great Britain claimed a fifth-placed finish in the Team event to sign off the IBSA European Championships, held at the University of Wolverhampton’s Sports Complex.

A total of nine countries entered the Team Championships and it was a tough first round for the GB guys as they were drawn against eventual bronze medalists Russia. The squad always had their backs against the wall the entire day as a result of no -81kg category judoka in the team but the guys battled admirably none the less.

It wasn’t to be in the first round with a 4-1 defeat at the hands of the experienced Russian squad. Evan Molloy continued his promising form as he scored notable victories over a series of solid judoka, whilst the likes of Connah Anders and Elliot Stewart continued their development at their first Visually Impaired major championships.

No doubt the pick of ties was the repechage matchup against Germany with the British squad running out 3-2 winners overall as they progressed to the bronze medal contest. It was a tie that could have easily gone either way. Connah Anders was in fine form in the opening contest, but couldn’t find the winning score as he lost narrowly to bronze medalist Nashwan at -66kg.

Anders looked to have won the contest via ippon, only to have the referee remove the score and restart play, much to the annoyance of the home crowd. The stoppage in play allowed the German to regroup and catch Anders with a quick fire waza-ari double to move into a 3-1 lead as time expired. Evan Molloy evened things up with an impressive victory before GB defaulted in the following contest meaning Elliot Stewart and Jack Hodgson had to win to help GB progress.

They both handled the pressure excellently with Elliot Stewart demonstrating perfect contest management skills to win via a single waza-ari score. Jack Hodgson was coolness personified in the winner takes all contest as he throw his German opponent within the opening minute of the contest to secure the win. A result which delighted the home crowd!

It wasn’t to be in the medal contest as they lost 4-1, with their sole victory coming from newly crowned European Champion Chris Skelley as his trademark newaza come to the fore once again.

British Judo Announces Membership Price Increase Scroll to top
Select the fields to be shown. Others will be hidden. Drag and drop to rearrange the order.
Click outside to hide the compare bar
Compare