You are here: Home / Clubs / From Yellow Belt Challenge to Black belt 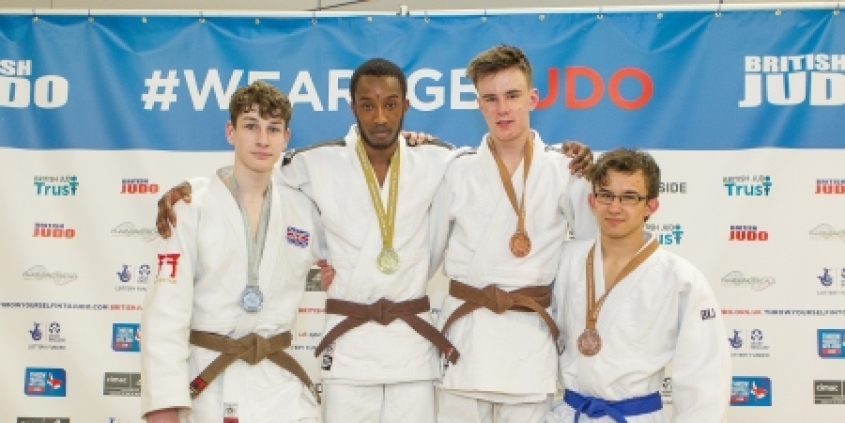 Victory at the British Schools Championships on 2-3 April saw Johnnie gain the final ten points needed to gain his black belt, just three years after making his start in judo with the initial support of The Yellow Belt Challenge in east London.

“This was an amazing achievement for him as not only did he win all contests by ippon but also accumulated the last 10 points needed for his black belt making him the highest grading Fighting Chance graduate and obtaining the grade in only three years and becoming Hackney Judo Club’s first home grown black belt.”

The Bsix college student first tried judo at his then school Petchey Academy before coming along to the Queensbridge Leisure Centre in Hackney where Walker-Hall enrolled him in the Yellow Belt Challenge.

Speaking about how he got into judo, Johnnie said: “I started judo because I always wanted to do a martial art and I saw an opportunity and went for it. My favourite part about the sport is that I get to compete and express myself. I also get to meet new people and make great friends.

“My first competition was a local development competition hosted by Tower Hamlets Judo Club a few months after starting and was a yellow belt. I won all contests by ippon winning gold and beating some players with a higher grade.”

Johnnie has also trained as a table official and as a junior referee and wants to compete at the highest level as well as support other judo players at his club.

“I think officiating and refereeing is very interesting because you get to see different types of judo players and learn how competitions actually are run. It’s great to be a part of that.

“I hope to progress, build on my performances and join the national programme and one day compete as an international judoka at World Championships and Olympic Games.

“I also will hopefully start my Level 1 coaching award later this year as I would like to help develop other players within my club and maybe one day run my own judo club.”

If you would like to learn more about The Yellow Belt Challenge please visit http://www.yellowbeltchallenge.co.uk/

First junior medal for Petgrave Scroll to top
Select the fields to be shown. Others will be hidden. Drag and drop to rearrange the order.
Click outside to hide the compare bar
Compare