You are here: Home / Featured / Fifth place on Paris debut for Renshall 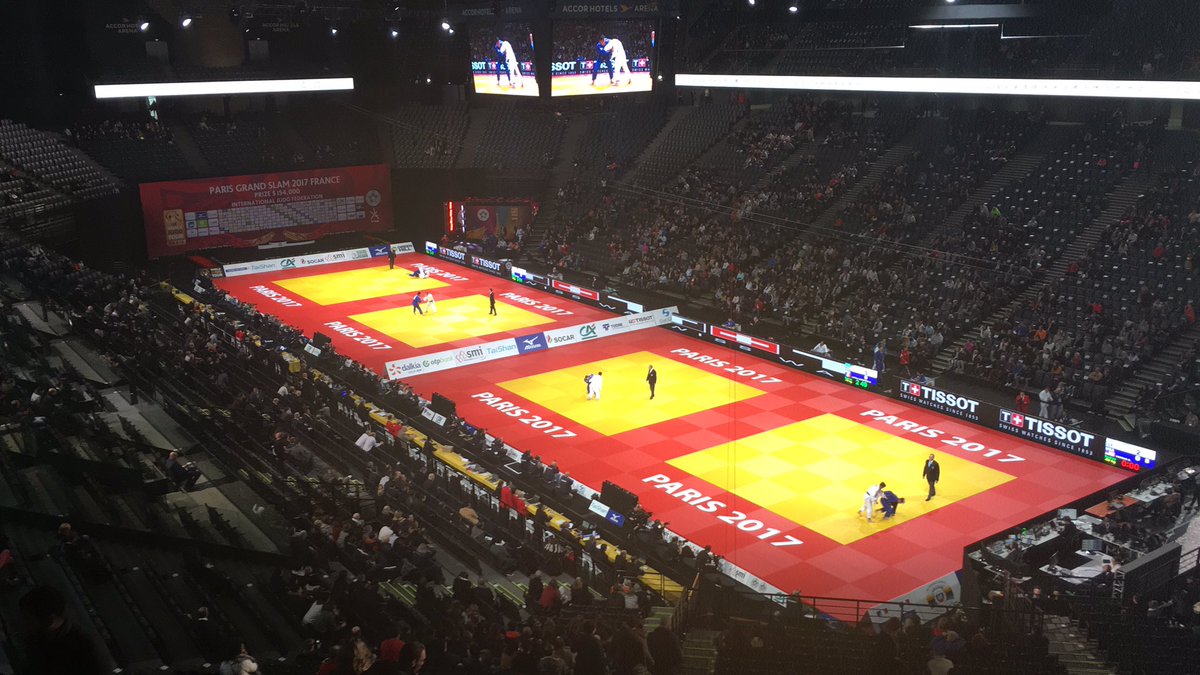 Lucy Renshall made an impressive debut at the 2017 Paris Grand Slam as she finished in fifth after some very impressive performances.

Fighting on Saturday 11 February at the AccorsHotel Arena the SKK judoka was up against Spain’s Sarai Padilla Guerrero in the second round after receiving a bye as a top eight seed.

Renshall put in a very strong performance against the Spanish judoka and forced her opponent to pick up two shidos. However, it looked like the contest would go still go into golden score. The British judoka put in one final big attack to score for waza-ari in dying seconds and book her spot in the last eight.

Olympic champion Tina Trstenjak (SLO) was next up and the Slovenian had looked in serious form in her first match scoring four waza-ari against Gankhaich Bold (MGL). She carried that form forward and was able to secure osaekomi with less than two minutes left for the full 20 seconds.

Dropping into the repechage Renshall was faced by Japan’s Miho Minei, 2014 Junior World champion and 2016 Tokyo Grand Slam silver medallist. Minei had also beaten Renshall at the 2014 Junior Worlds but Renshall turned in arguably her best performance of the day as she proved more than a match for the Japanese judoka.

The British fighter displayed great maturity as she went ahead by waza-ari with half the contest to go and, despite conceding a couple of late shidos, was able to hold onto the lead.

Kiyomi Watanabe was her opponent for bronze and the Philippine judoka had been in great form during the day including a win over World No.10 Junxia Yang of China. In a tough contest Renshall was close to scoring on a number of occasions but couldn’t quite finish the contest. With less than thirty seconds to go, Watanabe was able to get Renshall in an awkward position and apply the juji-gatame, forcing the British judoka to tap out.

While she missed out on a medal, Renshall has gained 360 world ranking points which should move her inside the world top 20 for the first time in her career and confidence from competing in front of big crowd.

Kelly Edwards (-52kg) was looking to back up a strong end to 2016 as she took on Romania’s Larisa Florian in the first round. Edwards had beaten Florian in their most recent encounter at the 2016 Zagreb Grand Prix but the Romanian also had a win to her name at the 2015 Baku European Games. It was close tactical affair with the only score in regulation time a shido against the British judoka for passivity. In the end Florian finished the contest in golden score as she threw for waza-ari.

Ashley McKenzie (-60kg) was making his return to international judo for the first time since the Rio Olympic Games. He was up against home favourite Walide Khyar (FRA) in the second round and it was a sign of how excited the crowd were that people were chanting Khyar’s name even before he was called to the mat.

Khyar had won their previous encounter at the 2016 European Championships in Kazan when McKenzie had led by a yuko before the French judoka came on strong to win by waza-ari. This fight followed a similar storyline with McKenzie controlling things early on before going ahead by waza-ari with just over a minute to go. However, Khyar came back well and the British judoka was penalised twice in the final minute. These two shidos added to an early penalty which meant McKenzie lost by hansoku-make with nine seconds to go.

Sunday at the Paris Grand Slam will see Natalie Powell (-78kg) and Max Stewart (-90kg) in action. Powell will be aiming to add to her bronze medal at last year’s Slam while Stewart will be making his Paris debut after an impressive 2016.

Fifth on Paris Debut for Max Stewart Scroll to top
Select the fields to be shown. Others will be hidden. Drag and drop to rearrange the order.
Click outside to hide the compare bar
Compare
Wishlist 0
Open wishlist page Continue shopping