You are here: Home / GB Judo / Fifth for Conway at European Championships 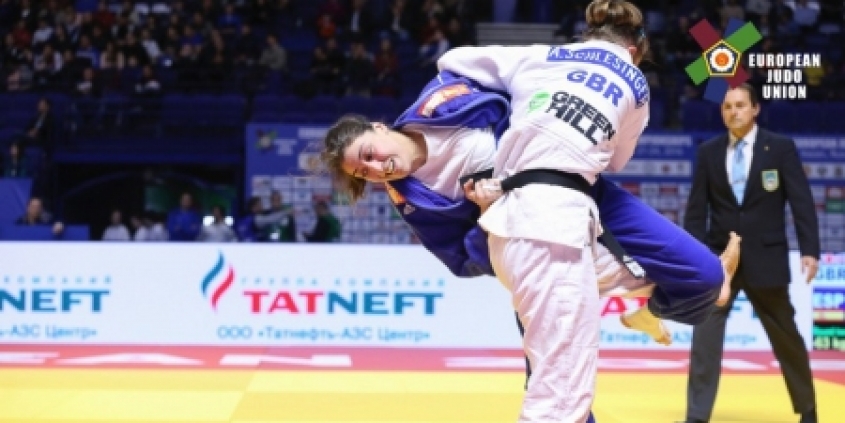 Sally Conway’s fifth was the highlight for British Judo on the second day of the 2016 European Judo Championships in Kazan, Russia on Friday 22 April.

In a world-class field Conway had to come through a number of tough contests however she started the day with a fairly routine win over Jovana Pekovic (MNE) as her ne-waza ensured a swift victory by ippon.

Conway’s quarter-final saw her take on current World Champion Emane Gevrise (FRA) and going into the last minute the British judoka was behind by two shidos to one before Gevrise was able to pull out an ippon score to take the contest.

Dropping into the repechage Conway found herself three shidos down in almost no time against Spain’s Maria Bernabeu however a lovely bit of skill scored her a yuko and then she did enough to secure her place in the bronze match.

France’s Fanny Estelle Posvite was Conway’s opponent for bronze and it was a fairly tactical encounter the British judoka was unable to get a foothold with Posvite scoring a waza-ari that proved the real difference leaving Conway with fifth, her fourth top eight result at a senior European Championships.

Owen Livesey (-81kg) produced some impressive judo as well as he beat two higher-ranked players in Antonio Ciano (ITA) and Laszlo Csoknyai (HUN) on his way to the last 16. After beating Ciano via hold down the British judoka produced a lovely bit of judo to throw Csoknyai for ippon and gain some measure of revenge for earlier defeats in 2016 to the Hungarian in Havana and Paris.

This set-up up a third round match-up with Dutch Junior World Champion Frank De Wit and it was the younger judoka who came out on top throwing Livesey for a spectacular ippon.

Amy Livesey (-63kg) made her senior European Championships debut and got off to a good start as yuko was enough to see her through her first round contest with highly experienced World No.19 Hilde Drexler (AUT). However her last 16 opponent, World No.9 Anicka Van Emden would prove too strong and after throwing the British judoka for waza-ari she was able to secure the win on the ground.

Alice Schlesinger (-63kg) also started her day with a win as she twice scored yuko against Nina Milosevic (SLO) before losing her second round contest with Isabel Puche (ESP) as the Spanish judoka’s single yuko put Schlesinger out of the competition.

Danny Williams (-73kg) was too strong for Cedric Bessi (MON) in the first round with his ne-waza skills coming to the fore. A waza-ari was more than enough to give him the win. However his second round was against local hero Denis Iartcev (RUS) and the Russian proved too strong as he forced Williams to pick up three shidos before securing the decisive ippon score.

Powell takes bronze at European Championships Scroll to top
Select the fields to be shown. Others will be hidden. Drag and drop to rearrange the order.
Click outside to hide the compare bar
Compare