You are here: Home / Featured / European Bronze for Alice Schlesinger 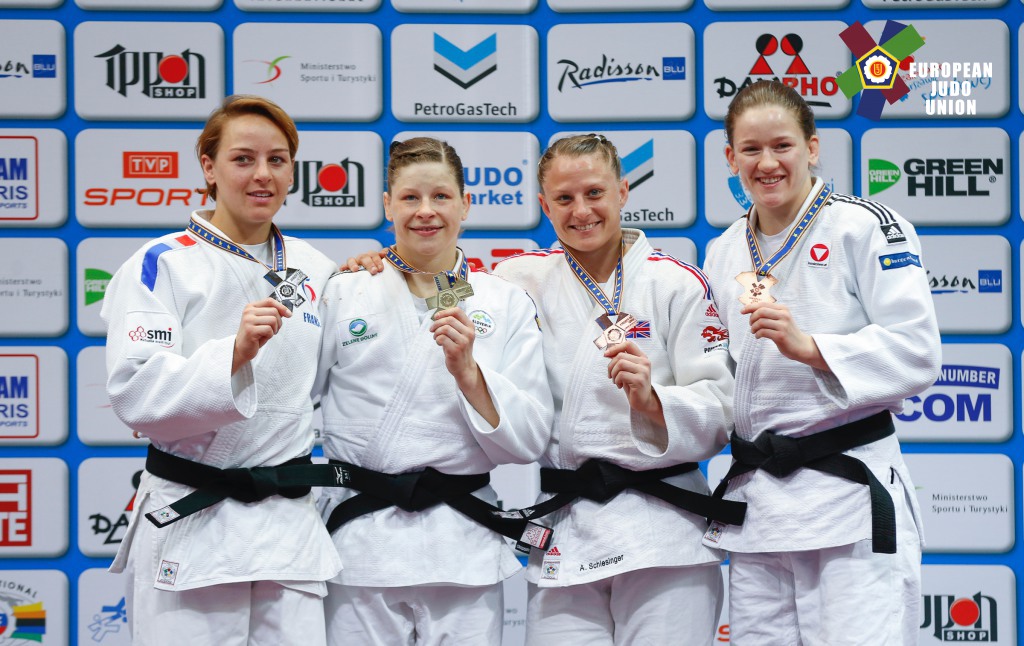 This was the -63kg judoka’s first European medal for Great Britain, the fourth of her career, and she made a strong start as she overpowered home judoka Karolina Talach in the second round. Schlesinger went ahead early by waza-ari before following up with a characteristic big throw for ippon to book a place in the quarter-finals.

There she took on 2015 European Champion Martyna Trajdos (GER) in a close and exciting contest. The German judoka went ahead by waza-ari but Schlesinger was able to pull it back and force the contest into golden score. There it was largely tit for tat in terms of attacks before Trajdos took advantage of a slight error from Schlesinger and picked her second waza-ari.

The British judoka dropped into the repechage final where she faced Italy’s Edwige Gwend. Schlesinger had lost her last two contests to the Italian and it was another close match with neither judoka able to produce a positive score in regulation time.

Schlesinger looked the more positive fighter during golden score and it paid off as she superbly countered an attempted attack by Gwend to finish the contest with a waza-ari score of her own.

This meant the British judoka was due to face World No.2 Clarisse Agbegnenou of France for the bronze medal. However the 2014 World Champion did not come out for the medal contest meaning Schlesinger took home the bronze medal.

“It feels good to win another European medal and this time for Great Britain. I have only had one competition this year due to injury, so it was good to have some fights and get back into things.”

“Alice fought well today and is back on a very strong European rostrum, her first since 2012, with the World No.1, 3 and 4. Alice looked very explosive today and her transition is getting better. Amy (Livesey) also put in a good performance winning one and losing to the French World No.2 but showing that she is not out of place at this level.”

Amy Livesey was also in action today at -63kg. She came through a tough opening contest with Daniela Kazanoi of Belarus winning in golden score by waza-ari after having been two shidos (penalties) down early on. In the last 16 though she faced Agbegnenou and despite a spirited performance she was unable to provent the French judoka from taking the contest by ippon.

Saturday will see Natalie Powell (-78kg), Max Stewart (-90kg) and Ben Fletcher (-100kg) in action. The competition starts at the slightly later time of 1000 UK time with live coverage via ippon.tv and you can follow @BritishJudo on Twitter for live updates on the British judoka

Second European Bronze For Natalie Powell Scroll to top
Select the fields to be shown. Others will be hidden. Drag and drop to rearrange the order.
Click outside to hide the compare bar
Compare