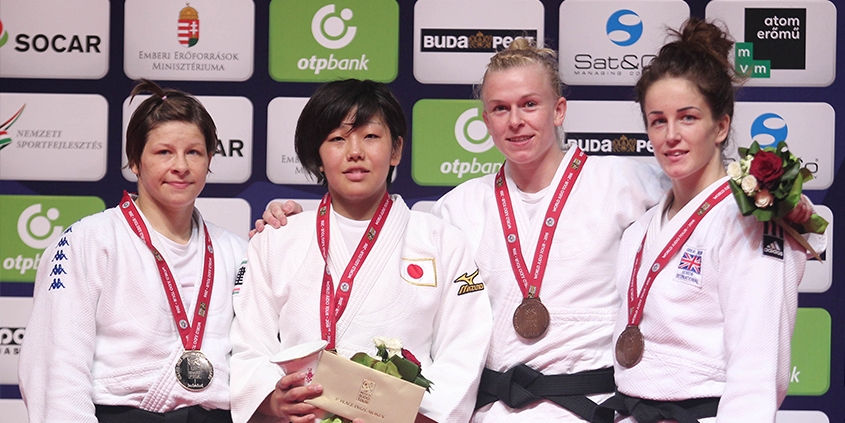 Amy Livesey crowned a good day’s judo as she took home bronze from day one of the 2016 Budapest Grand Prix on Saturday 25 June.

In her first ever Grand Prix appearance Livesey (-63kg) was in good form from the start as she threw Angeles Lopez Aguilera (ESP) for waza-ari in the final ten seconds to gain some measure of revenge for defeat to the same opponent at the Madrid European Open. Her quarter-final with Franciska Szabo (HUN) was a tense encounter as neither judoka was able to score going into golden score.

It was Livesey however who had the better stamina as she forced the Hungarian to pick up a shido for a false attack which secured her spot in the final four where she faced World No.1 and current World Champion Tina Trstenjak (SLO).

The Slovenian took the lead by yuko but the British judoka kept up the pressure and was inches from throwing her opponent for a contest winning score in the final exchange, having also forced Trstenjak to pick up a shido.

Estefania Garcia (ECU) was Livesey’s opponent for bronze and the British judoka was the dominant player as she threw Garcia for yuko twice and saw out the contest well to take the win and the medal.

Speaking afterwards Livesey said: “I’m really pleased with my performance today. I didn’t think the medal would come so soon and I’m really looking forward to the rest of the year now.”

There was also a fifth place for Lucy Renshall in the -63kg category in her first Grand Prix. Renshall made an impressive start as she forced Katerina Nikoloska (MCD) to tap out after strong work on the floor. Renshall took on Trstenjak in her quarter-final and after being thrown for waza-ari in the opening minute the British judoka grew into the contest but was unable to get a score back dropping into the repechage.

A single yuko proved enough in the repechage final with Szabo (HUN) and gave Renshall the opportunity to go for bronze against Australia’s Katharina Haecker. However the contest went the way of the Australian as Renshall was caught on the floor and forced to tap out.

Bekky Livesey (-57kg) and Aaron Turner (-73kg) were also in action but lost out in their opening contests on shidos to Momo Tamaoki (JPN) and Artem Khomula (UKR).

Jemima Yeats-Brown (-70kg), Jodie Myers (+78kg), Max Stewart (-90kg), Phil Awiti-Alcaraz (-100kg) and Neil Schofield (+100kg) will be stepping on the tatami on Sunday 26 June at the Budapest Grand Prix with contests starting from 1000 GMT. Follow live on ippon.tv and @BritishJudo on Twitter for updates on the British judoka.

Budapest next stop on world tour

Budapest bronze for Awiti-Alcaraz Scroll to top
Select the fields to be shown. Others will be hidden. Drag and drop to rearrange the order.
Click outside to hide the compare bar
Compare
Wishlist 0
Open wishlist page Continue shopping