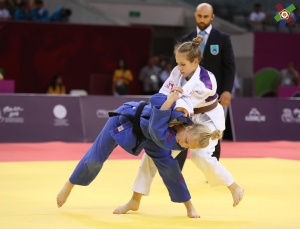 Keen (-52kg), the pick of the GB players on day 2, had a bye in the opening round, before defeating Paula Eliza Cera (LAT) in the second round to set up a quarter final against European leader and 2019 European Cadet Champion Veronica Toniolo (ITA). The experience of the Italian saw her defeat Keen by ippon score, and progress to the semi-finals and later claim bronze.

Keen was advanced to the Repechage where she defeated Ruth Lavy (ISR), in under 40-seconds, before later defeating Lana Gregorcic (SLO) to set up a bronze medal match against Alexandra Pasca (ROU). In the bronze medal match, Keen was by far the more dominant player, but struggled to find a winning score. With the match over 2-minutes into Golden Score, and both players clearly tiring, it was Pasca who was able to throw Keen for ippon and claim the bronze medal. The result sees Keen finish in 5th position.

Isobel Kitchen (-57kg) had a bye in the opening round, she then faced home player Aytaj Gardaskhanli (AZE) in the second round but was unfortunately defeated. However, the Azerbaijan player later went on to win the Pool, so Kitchen was progressed to the Repechage where she faced Erika Vauhkonen (FIN). The Finnish player amassed three shido’s which saw Kitchen progress to face European number 3 and 2019 European Cadet Championship silver medallist, Florentina Ivanescu (ROU). The European ranking gap of 71 places between the two players, and the Romanian players experience, showed as Kitchen was defeated, meaning she finished in 9th position overall.

Grace Griffith (63kg) had a bye in the opening round before facing Martyna Glubiak (POL) in the second round. The Polish player progressed to the quarter-final courtesy of a single waza-ari score.

Ethan Nairne (-66kg) and Ryan Rijksen-Salman (-73kg) were both defeated in their opening round matches against Richard Proell (AUT) and Kalle Friis-Hansen (DEN) respectively.

Tomorrow is the final day of the EYOF individual programme with Daisy Gilroy (-70kg) the sole GB representative.

Zagreb Grand Prix Preview: Scroll to top
Select the fields to be shown. Others will be hidden. Drag and drop to rearrange the order.
Click outside to hide the compare bar
Compare