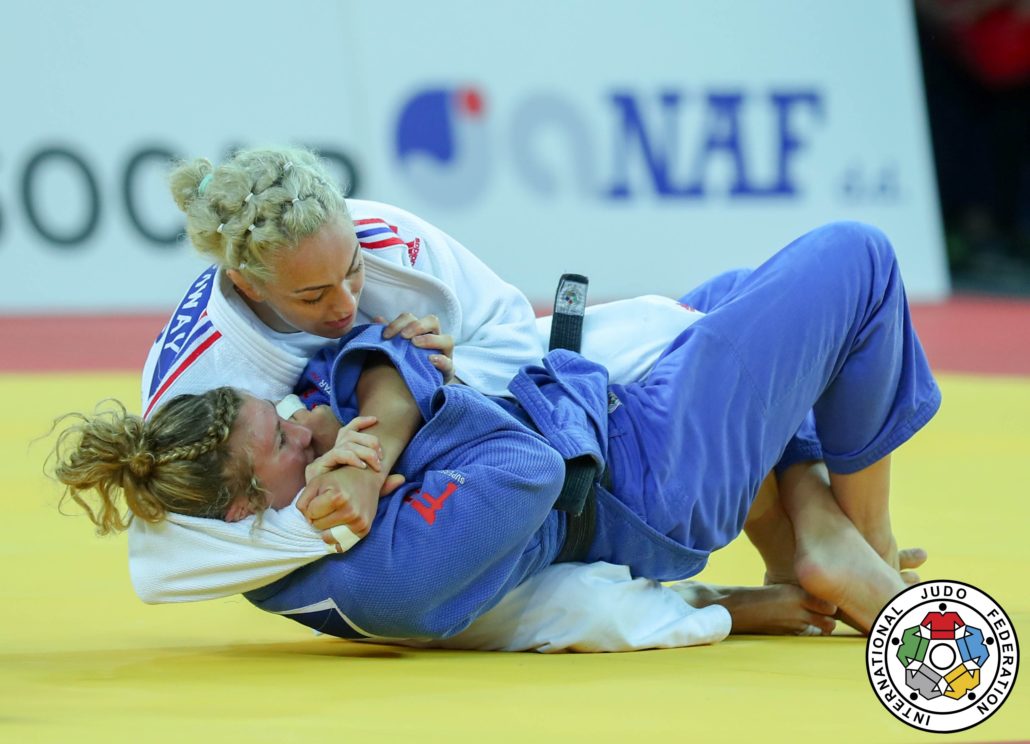 Sally Conway made it four medals in four competitions in 2018 as she won bronze on the second day of the Zagreb Grand Prix on Saturday 28 July.

The -70kg judoka has been in consistent form this year with gold at the Paris Grand Slam followed by bronze at the Antalya Grand Prix and silver at the European Championships.

The Rio 2016 bronze medallist went in as sixth seed and backed up her ranking from the start. She made short work of Belgian Roxane Taeymans in the first round, throwing her for ippon with a big Harai-makikomi.

She followed that up in the second round as she saw off Slovenia’s Patricija Brolih (SLO). Conway took the Slovenian judoka to ground and was able force a hold down, resulting in another ippon win.

She made it three ippon wins in as many fights as she beat Brazil’s Amanda Oliveira with a combination of tachiwaza and newaza.

Conway took the lead in the opening minute, throwing Oliveira for waza-ari. A couple of exchanges later the British judoka spotted an opportunity to force an armlock and forced the Brazilian to tap.

Her semi-final opponent would be WRL 4 Marie Eve Gahie of France. The British judoka had won their last contest at the Paris Grand Slam this year but the French judoka was too good as two waza-ari scores in quick succession gave her the win.

This dropped Conway into the bronze medal fight where she faced WRL 6 Sanne Van Dijke (NED). The British judoka had beaten the former European champion in their only meeting prior to this event.

The fight would last less than a minute as Conway transitioned into newaza and forced Van Dijke into a vulnerable position where she was able to apply juji-gatame and force the Dutch judoka to tap.

“I felt like I didn’t have the best preparation leading into this event due to picking up an little ankle injury and being on and off the mat but I just wanted to come here today and give my best.

“Coming away with a bronze when I wasn’t 100% at the races today I am very happy.

“Looking forward to making the adjustment I need to in the next few weeks between now and the Worlds to give me the best chance of performing my best and able to give my hardest fight.”

Livesey was in her first Grand Prix since January and she made a good start as she saw off the challenge of Israel’s Gili Sharir in the first round. Two nice bits of ashi-waza saw her take the win with well over a minute left on the clock.

WRL 17 Daria Davydova (RUS) was next up in the round of 16 and Livesey came to close to scoring on a number of occasions against her higher-ranked opponent.

The British judoka’s greater work rate meant that the Russian judoka picked up shidos for passivity and the weight of attacks told in golden score with Davydova getting a third shido.

Olympic champion Tina Trstenjak (SLO) was too strong in the quarters as she controlled proceedings from the start and two waza-ari scores dropped Livesey into the repechage.

Livesey took on Brazil’s Alexia Castilhos for a place in the bronze medal contest. The British judoka went ahead by waza-ari but soon found herself pegged back.

The contest into golden score with the Brazilian getting the vital second waza-ari after 33 seconds.

McWatt put in a mature and tactical performance in his first round contest against WRL 27 Achraf Moutii (MAR).

The British judoka outworked his opponent which led to the Moroccan judoka picking up three shidos.

The second round against Kazakhstan’s Bekzhan Abdualiyev lasted less than a minute as McWatt made short work of his opponent, throwing for ippon with a dynamic bit of judo.

WRL 14 Vedat Albayrak (TUR) was next up in the round of 16 and the Turkish judoka has been in good form this year with three Grand Prix medals including two gold.

McWatt though more than held his own and threw Albayrak with a lovely ura-nage to secure his place in the quarters.

There he took on WRL 9 Matthias Casse (BEL) and it was a pretty even contest for the most part though the greater attack rate of the Belgian judoka meant that McWatt found himself two shidos to one down as they approached the end of the contest.

Following a strong attack by the Belgian, Casse was able to apply a strangle which forced McWatt to tap.

This meant that McWatt would do into the repechage final where he took on another top ten judoka, this time in WRL 8 Sotaro Fujiwara (JPN).

The Japanese judoka waited for his opportunity to throw McWatt for waza-ari and he finished the contest in newaza with a strong hold down.

Dan Powell (-73kg) went out in the second round to Belarus’s Vadzim Shoka. The British judoka had beaten Marin Franusic (CRO) in the first round, throwing the Croatian for waza-ari and then showing good transition in newaza to secure osaekomi.

Eric Ham (-73kg) and James Hayes (-81kg) went out in the first round to Lukas Reiter (AUT) and Jovan Niskanovic (SRB) respectively.

Competition starts at 0900 UK time with live coverage via live.ijf.org. Follow @BritishJudo on Twitter for updates throughout the day

Fifth in Zagreb for Max Stewart Scroll to top
Select the fields to be shown. Others will be hidden. Drag and drop to rearrange the order.
Click outside to hide the compare bar
Compare
Wishlist 0
Open wishlist page Continue shopping