You are here: Home / Featured / Chamberlain claims highest ever finish at European Games 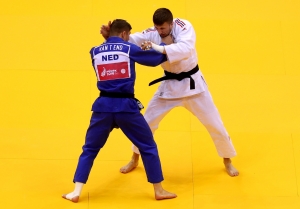 Frazer Chamberlain was the pick of Team GB’s judo squad on Day 4 of the European Games. Defeating former World Champion Nemanja Madjov emphatically with a brutal throw was one of many highlights. Knocked into repechage by quality Dutch fighter Noel Van T End, Chamberlain navigated a tricky fight against Slovakia’s Milan Randl to proceed to the bronze medal match. He went straight on the attack as he had all day and was causing his opponent all sorts of problems when he got caught on the wrong side rolling his opponent. The mistake cost him the fight as he was held.

A disappointed Chamberlain said: “The first three and a half minutes went well, I could feel him wearing out, but it’s like anything in judo you can get caught at any second so you can’t switch off. This is my best senior performance to date. I’m devastated not to get the medal but I’m hungry, I want to win. I’ve just got to put it behind me now and get on to the next one and the long run is Tokyo. It’s been a great experience leading into the games. I’ve got to thank British judo and Team GB for having faith in me and putting me in it, I’m just gutted I couldn’t bring home the medal.”

Also in the men’s -90kg category, up against Frenchman Aurelian Diesse, Max Stewart lost a narrow fight. The two men were evenly matched throughout, but the Frenchman eventually got the upper hand and took the win. “We’ve fought before, so it was always going to be tight. Perhaps our game plan wasn’t the right one, maybe I should have changed it up half-way through. It’s judo, maybe next time I need to be a bit smarter. I know these guys aren’t better than me, but today he fought a bit smarter than me.”

In the women’s -78kg Jemima Yeats-Brown was defeated by Kosovan Loriana Kuka on a close referee call. Natalie Powell over-powered Russian Antonina Shmeleva in round 2, however defeat against Slovenian Klara Apotekar meant repechage where she lost to powerful French fighter Madeleine Malonga.

“She’s very explosive and strong particularly in the first two minutes of the fight and I know from past-experience I’ve got to defend hard and as the fight goes on I come into my own, but I started thinking too much rather than feeling the moment. I was more frustrated with the fight before, I thought I had the right strategy this time and the fight was going to plan. I tried to throw her and I think that was the wrong decision. I’ll have to watch that fight back and see where I went wrong.

“Overall it’s a frustrating day because coming into it I felt I had really good preparation and I was feeling in a good place. So to not come away with a result is frustrating, but in the grand scheme of things, the World Championships are the priority in this block and this is a stepping stone to that so hopefully it will come together there.”

In the +78kg Sarah Adlington defeated Hungarian Emese Karpati to open her account, but faced the imposing Iryna Kindzerska from Azerbaijan in the Quarter-Finals. A loss against the Azerbaijan fighter took her through to repechage, where Russian Kseniia Chibisova lay in wait. Unfortunately there was no way through for Adlington.

British Judo Visually Impaired Team set for IBSA International Qualifier Scroll to top
Select the fields to be shown. Others will be hidden. Drag and drop to rearrange the order.
Click outside to hide the compare bar
Compare