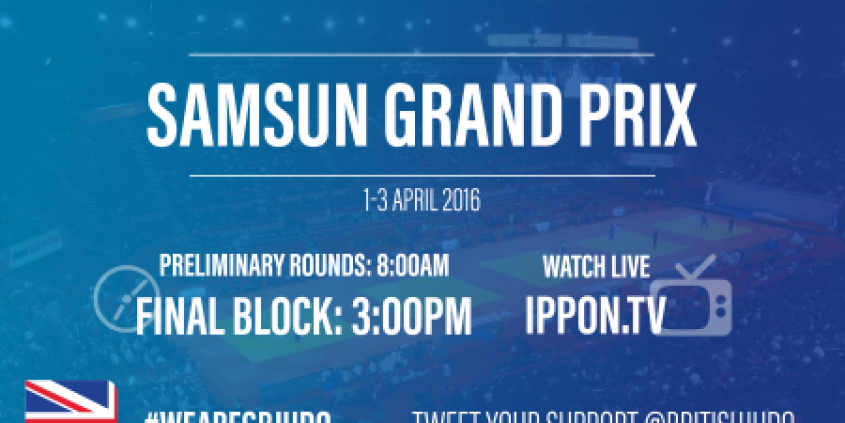 World number 6 Sally Conway (-70kg) will be searching for her fourth Samsun medal in as many events, as 17 British athletes take to the tatami at the Turkish Grand Prix in Samsun this weekend.

Conway took the gold medal it 2013, before subsequent silver and bronze medals in the 2014 and 2015 respectively. This will be the Edinburgh judoka’s first Grand Prix since Dusseldorf in February where she came 5th.

Samsun has been a happy hunting ground for British judoka in recent years with 5 of the 17 competitors at this year’s event having previously medalled in the Turkish city.

Camberley judoka Ashley McKenzie and Nathon Burns will be in action in the -60kg and -66kg categories respectively, whilst 2014 Samsun Grand Prix bronze medallist Colin Oates will also be competing alongside Burns in the -66kg category.

After trips to Asia, Australia and Africa at the tail end of 2015, Danny Williams (-73kg) will be competing in his first event on European soil since the European Open in Glasgow last October. Jan Gosiewski (also -73kg) will be looking for an improved performance following his first round exit in Tbilisi last weekend.

There is optimism in the -81kg category for Great Britain as Owen Livesey has medalled at his last two events at the Panamerican Open competitions in Buenos and Lima, while Tom Reed scored two ippons during a promising showing at the Tbilisi Grand Prix last week.

Frazer Chamberlain will be looking to address small differences which saw him on the wrong side of a narrow first round defeat in the -90kg category in Tbilisi.

Ben Fletcher will be looking improve on his 7th place finish in Tbilisi and be amongst the -100kg category medals in Turkey. 22-year-old Philip Awiti-Alcaraz (-100kg) will be looking to gain more experience at this level after some promising showings in Europe this year.

This will be Chris Sherrington’s (+100kg) third event since his comeback from retirement with a gold medal at the Uster-Zurich European Cup at the start of March.

Kimberley Renicks will be set to compete in her eighth event of 2016 when she steps onto the mat in the -48kg category.

There are two British representatives in the -57kg category, Nekoda Davis and Laure Fournier. Davis won a bronze medal last time out at the Yasar Dogu Sports Arena and will be aiming to pick up another medal in her quest for Rio qualification. Meanwhile, this will be 25-year-old Fournier’s first ever appearance at a Grand Prix event.

Alice Schlesinger (-63kg) was in imposing form in Tbilisi before her last minute defeat to Marielle Pruvost in the quarter-final. Alice will want to go further and be amongst the medals in Samsun where she was on the podium last year with a bronze medal.

Finally in the +78kg category, Sarah Adlington is also on the hunt for Rio qualification points. Adlington is currently in a continental quota position but will want to secure an outright qualification spot with more points in Samsun.

Watch all the action live on http://ippon.tv from 08.00am GMT with the full draw on ippon.org. Follow @BritishJudo on Twitter for live updates on British competitors in action.

Dan Grade Promotions – March 2016 Scroll to top
Select the fields to be shown. Others will be hidden. Drag and drop to rearrange the order.
Click outside to hide the compare bar
Compare