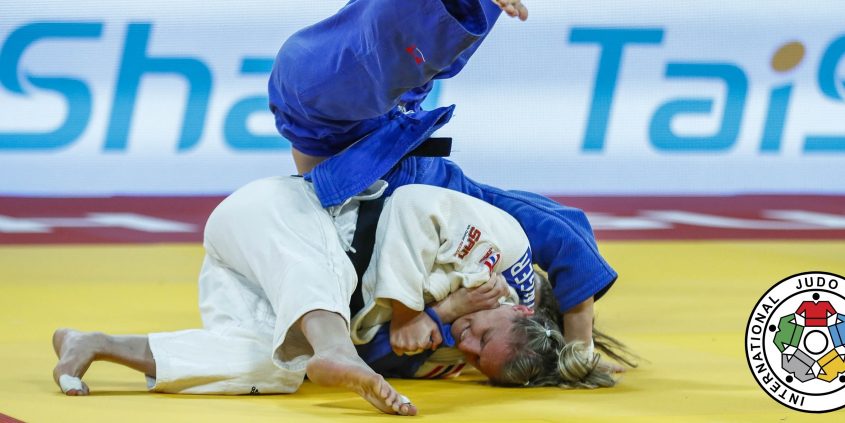 Alice Schlesinger missed out on Gold in the Final of -63kg category at The Hague Grand Prix during the second day of competition in the Netherlands.

Mirroring Ashley McKenzie’s silver medal yesterday, Schlesinger was cruelly defeated in Golden Score in a competitive final which could have gone in either direction.

Coming up against Dutch judoka Juul Franssen in the Final, Schlesinger looked to exert pressure on her younger opponent from the outset. Franssen had previously won a Gold medal at the Abu Dhabi Grand Slam in 2016 along with a host of Grand Prix and Grand Slam, as she proved a worthy opponent. It was a high quality Final that saw the fighters inseparable after four minutes.

Schlesinger was warned about her defensive style during the extra period and could have been awarded a shido on numerous occasions. She left the mat a number of times before the referee deemed it worthy of a shido, and the contest was over, giving Schlesinger the silver medal.

She had breezed through the early morning contests. Following a bye into the Quarter Finals, the top seeded judoka won her opening fight against Canada’s Catherine Beauchemin-Pinard which also entered Golden Score. She was able to win the contest after 60 seconds of Golden Score as she progressed to face Dutch Iris Iwema. Golden Score was certainly not required though in this match as Schlesinger clocked up an impressive six waza-ari scores as she dominated her opponent throughout to secure her passage through to the final.

Elsewhere on the mat today, it was a tail of second round exits as Eric Ham, Owen Livesey and Danny Williams all suffered defeats. Eric Ham won his opening round contest of the -73kg category in under 20 seconds as he forced Cedric Bessi from Monaco to submit to an arm lock. He succumbed to defeat to Gambia’s Faye Njie with a single waza-ari separating the athletes.

Danny Williams claimed a Golden Score victory in the First round of the -73kg category but could not progress past Kosovo judoka Akil Gjkova. Williams had to be treated with a blood injury mid-way through the contest whilst a waza-ari score down. Williams pushed to level the contest but Gjkova countered his attack to secure the ippon finish in the closing moments.

Owen Livesey (-81kg) suffered a similar fate as he brushed aside Montentegro’s Srdjan Mrvaljevic in the opening round, but came up Dutch Frank de Wit in the 2nd round. De Wit secured a waza-ari in the opening stages and Livesey had no answer as he failed to find the score needed.

Five more GB athletes take to the mat tomorrow in the final day of competition at The Hague Grand Prix including the Grand Prix debut of the promising Jamal Petgrave.

Sarah Adlington Scoops Hague Grand Prix Bronze Medal Scroll to top
Select the fields to be shown. Others will be hidden. Drag and drop to rearrange the order.
Click outside to hide the compare bar
Compare