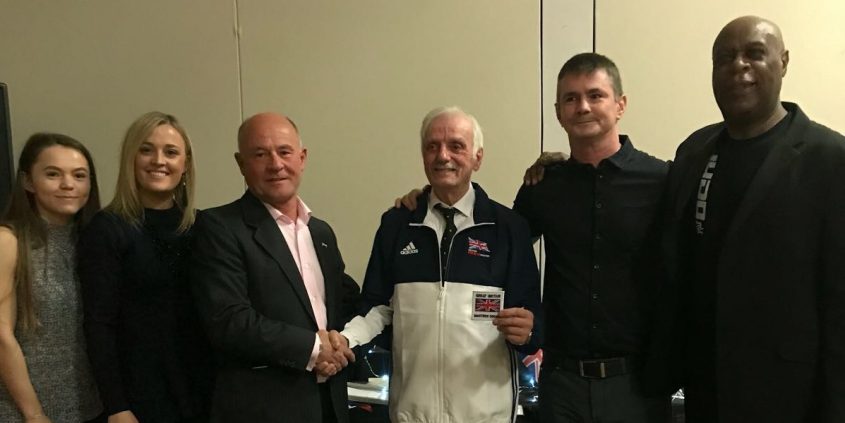 For many attending Jo-Dan Judo Club’s annual presentation evening last week, it was a chance for celebrating the last 12 months of hard-work, determination and success, but for one Pete Salsbury, the evening took on a whole new meaning.

Turning 80 in January, Pete has seen it all and won it all in judo, and continues to do so on a frequent basis. A gold medal was added to his impressive medal haul at the British Masters Open Veterans competition, a seventh of its kind for Salsbury.

Pete has been coaching judoka of all ages for the past 40 years and has seen over 60 of those students achieve their Dan grades with a multitude of British Champions within those ranks. To this day, he still takes weekly classes to an expectant class of eager athletes, keen to draw from his considerable experience.

Club Captain Gary Stack, along with British Judo’s Nicole Nunn, spoke with the Masters Commission and the Promotions Commission about the possibility of including Pete in the Masters squad and the approval of his promotion to 4th Dan.

Both were unanimously accepted and plans were put in place to surprise Pete during the Presentation Evening. Head of the Masters Commission Chris Doherty attended the evening to formally present him with his Masters badge and 4th Dan Grade certificate.

Pete was surprised and ecstatic by the gesture.

“It made such a difference to the evening and to Pete personally and all of the club members that he has trained over the years” said Club Captain, Gary Stack.

England Judo Appoint Talent Development Coaches Scroll to top
Select the fields to be shown. Others will be hidden. Drag and drop to rearrange the order.
Click outside to hide the compare bar
Compare