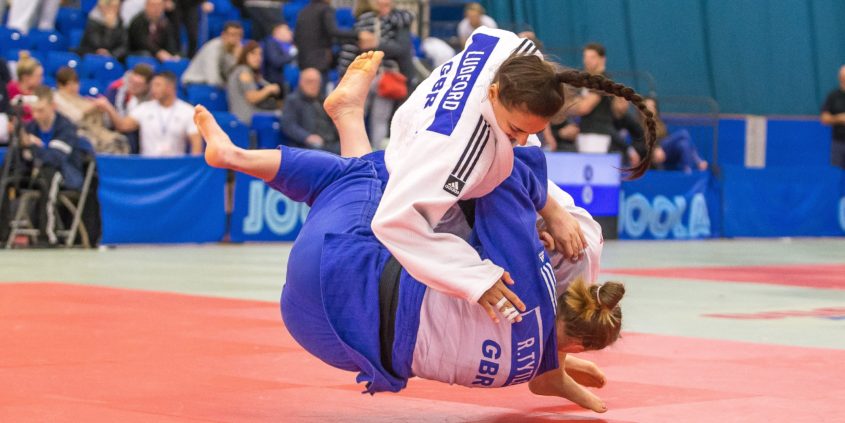 Shelley Ludford secured Seventh place on the final day of competition at the 2018 Junior European Championships to leave GB Judo without a medal at the competition.

Ludford looked to be heading for an early exit in her first appearance on the mat in the Second Round of the -78kg competition following a bye in the opening stage.

She fell a waza-ari score behind to Italy’s Arianna Conti with just a minute remaining on the scoreboard before reacting well as the clock entered the final 30 seconds. Ludford carefully picked her moment and forced Conti to submit on the mat with a well executed arm lock to prevent elimination.

It was a difficult Quarter Final draw for the British athlete however as she came up against Germany’s Junior World No.4 Christina Faber with an eye on a medal contest later in the day.

Faber demonstrated her strength early on in the contest and worked Ludford around the mat before registering a waza-ari and finishing the contest via osaekomi.

This dropped Ludford into the repechage where she was drawn against former World Cadet Silver medallist in the form of Hungary Fanni Toth. She was cheered on throughout the contest by her team mates in the crowd but could not find a score as she was countered by Toth and found herself pinned on the mat to eliminate her from the competition.

There was opening round disappointment for both Harry Lovell-Hewitt (-90g) and Wesley Greenidge (+100kg) as they were both eliminated in the Second Round of the their respective competitions following byes in the First Round.

Early Exits for GB at the Junior European Championships

Student Voucher Scheme Launches for 2018/19 Scroll to top
Select the fields to be shown. Others will be hidden. Drag and drop to rearrange the order.
Click outside to hide the compare bar
Compare