You are here: Home / GB Judo / Second bronze of the year for Powell on final day of Tbilisi Grand Pri... 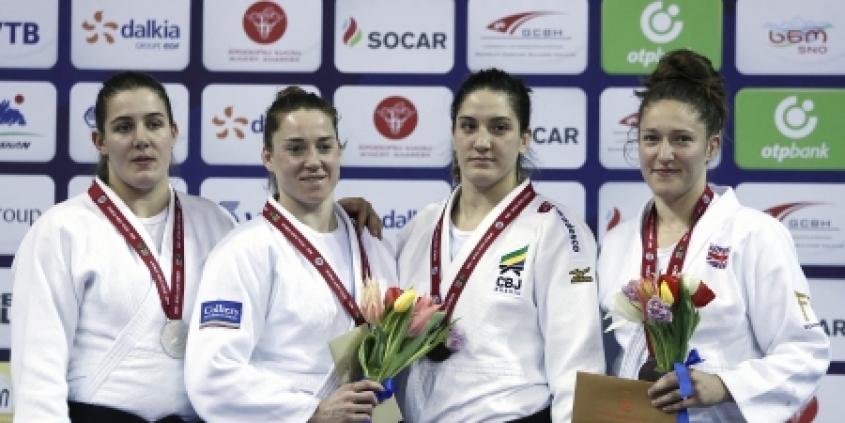 Natalie Powell defeated World number 12 Madeleine Malonga of France to claim her second bronze medal of the year on the final day of the Tbilisi Grand Prix.

With a bye through to the second round, Powell came up against Yujin Park (KOR) in her first contest of the Day. Powell forced the Korean to tap out after only 35 seconds to set up a Pool B final showdown with Sama Hawa Camara (FRA).

Irfon Judo Club’s Powell put pressure on her opponent from the start as the young French judoka stepped out of the tatami to concede a penalty. Powell then turned Camara and threw her backwards and down towards the floor for a yuko, which was enough to win the tie.

That victory took the Welsh judoka into the semi-final and her third match of the year against World number 4 Guusje Steenhuis of the Netherlands. Although Steenhuis leaded Powell 3-2 in the head-to-head going into the match, both of Powell’s wins have come in the last three months.

Steenhuis fell awkwardly on her right leg after Powell’s first attack and was moving awkwardly when she got back onto her feet. The Dutch judoka became more defensive giving away a penalty for shido. Powell gave away a penalty herself in what was becoming an exhausting battle between two of the world’s top 10 players in this category. The contest went to into golden score with both athletes showing great balance and strength to avoid being thrown by the other. However, it was Steenhuis that managed to score a decisive throw to end the match with both players left sitting exhausted on the mat.

Powell recuperated during the break before stepping back onto the mat for the Bronze medal match against Madeleine Malonga of France. The World number 12 frustrated Powell using her long reach to disrupt Powell’s attacks. Powell’s two penalty points played into a tiring Malonga’s hands as it looked as if the bronze might escape her. But Powell kept going and scored a deserved yuko which Malonga was unable to respond to.

“It was a tough day of fighting for me”, said Powell. “Going from a hard few weeks training in Brazil to competing straight away was tougher than I had predicted. I was happy to eventually come out of it with more qualification points, but at the same time I was very dissappointed not to win the semi-final. I’m now looking forward to a few weeks training now before the Europeans”.

In the -100kgs category Ben Fletcher raced into an early lead in his first contest of the day against Grigori Minaskin (EST) courtesy of an early penalty. Fletcher then showed great balance and awareness to escape an eye-catching attempted flip by Minaskin. The Team Bath judoka scored a yuko late on before successfully managing the remainder of the contest to set up a meeting with Michael Korrel (NED) in the second round.

With Fletcher 2-1 down on penalties in a fast paced encounter, Korrel looked to be in control of the tie. However, Fletcher forced Korrel backwards and onto his back whilst he was off balance to score a precious yuko which decided the contest in the Briton’s favour.

In the Pool C Final Fletcher came up against World number 7 Martin Pacek of Sweden. Pacek had never lost to Fletcher and extended his run over the Briton to 3 after forcing a tap out.

That sent Fletcher into the repechage of the -100kgs where he met Jorge Fonseca (POR). Although Fonseca looked threatening throughout the contest Fletcher managed to draw level with both players on one penalty score each. However, Fonseca increased the pressure and Fletcher was unable to escape from Fonseca’s final throw. The result meant Fletcher finished the -100kg competition in seventh place.

Chris Sherrington wasted no time in asserting himself in the +100kgs, forcing a tap out from Vakhtang Okruashvili (GEO) in three minutes to silence the home crowd. That victory set up a second round match with Israel’s Or Sasson. In a tense contest Sherrington conceded a decisive penalty in the final 30 seconds which saw his Israeli opponent progress in the competition at his expense.

There were first round exits for both Britons competing in the -90kgs. Frazer Chamberlain fell to an ippon in golden score against Slovakia’s Milan Randl. Despite a promising start Andrew Burns conceded an ippon in the final 2 seconds of his match with Quedjau Nhabali (UKR) to exit the competition.

Sarah Adlington was also a first round casualty in the +78kgs as she committed four penalties against the Ukraine’s Iryna Kindzerska.

Tbilisi was the first of back-to-back Grand Prixs, with all eyes now moving onto the Samsun Grand Prix in Turkey which starts on Friday 1st April.

Sheffield ready for British Schools Judo Championships weekend Scroll to top
Select the fields to be shown. Others will be hidden. Drag and drop to rearrange the order.
Click outside to hide the compare bar
Compare