You are here: Home / Association news / Royal Opening at the Greenhouse Sports Centre 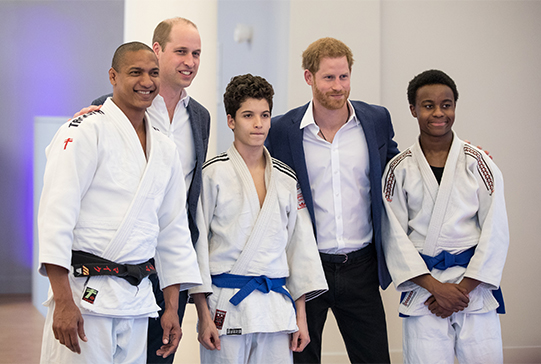 The pair were welcomed on arrival before watching a judo demonstration led by the students.

The boys also had the opportunity to speak to the Princes and pose for photos at the event attended by 300 guests and supporters of Greenhouse Sports to mark the opening of the new state of the art sport and community centre for young people in London.

Samuel said: “We spoke to Prince William & Prince Harry about how Greenhouse Sports had impacted our lives and what we would be doing if we weren’t doing sport. We also talked about how other people can relate to sport.”

In March, Ernest Bevin College was named the top British school for judo following a haul of five medals at the British Schools Judo Championship. Greenhouse Sports deliver judo, table tennis and volleyball at the school in Tooting through high quality sports coaching and mentoring, which in turn raises academic performance and achieves positive behavioural change amongst participants.

GB Judo announce first round of selections for 2018 World Judo Championship... Scroll to top
Select the fields to be shown. Others will be hidden. Drag and drop to rearrange the order.
Click outside to hide the compare bar
Compare