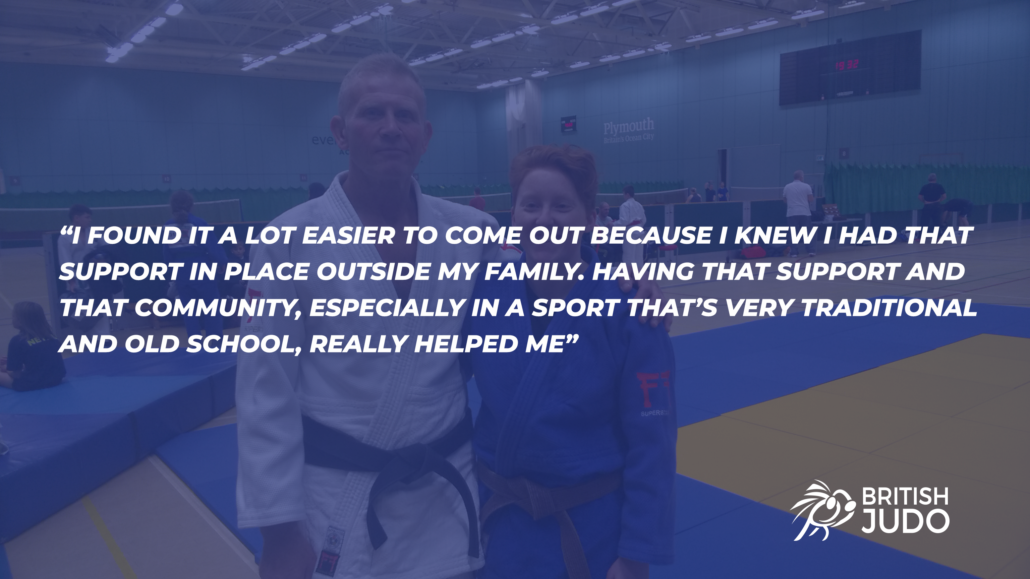 I was 12 when I started judo. They were running a club at my secondary school and me and a couple of friends thought it would be fun to go along.

I get bored quite easily with regular sports, the ones that are “hands-offs”, but this one really allowed me to get in there and do what I wanted to do.

It was a bit more physical and I wasn’t going to get hurt if I did it properly. There were loads of little aspects to it, like learning the different words. I just found it gave me something to do and something to focus on.

My first club was Plymouth Judo Club and they were good for helping me develop as a child in competition because that’s what I wanted to focus on. I progressed really quickly, I got my brown belt within four years.

Five years ago, when I started coming out, I came out to everyone in judo. Just to give them a heads up and if there were any issues, we’d know about it in advance.

While my new club has been very welcoming, my old club was a bit weird about it. There were some people that weren’t happy about it and treated me differently and didn’t want to fight me and stuff.

But then there were others on the mat that didn’t care, and they just dragged me to their side instead so that I avoided the people that didn’t like me.

I did ask those people who had an issue with me about why that was and partly it was because they’d never met a gay person and didn’t know how to react, and it was also because I was seen as a rival within judo.

It kind of sucked because it was one of the very few female judoka in my club that I could train with who was acting weird.

That upset me a bit but the guys in the club dealt with it very well and helped me deal with the fact that she didn’t like me.

Most of the older men and women in my old club were fine with me being gay. They were either married or had kids, so they didn’t really care too much. They saw me and thought “I wouldn’t want my kids treated this way”.

They treated me the way they would want their kids to be treated.

The younger men didn’t really care because they were my age and they were brought up in that generation.

At my new club (Drake Judo Club) they welcomed me instantly and I never had any issues. Everyone I know has been very welcoming about who I am, and they haven’t been bothered by it.

They haven’t treated me differently, they’ve treated me like everyone else, which is great!

I found it a lot easier to come out because I knew I had that support in place outside my family.

If I did have any issues, I could go to them. I knew some of them would be welcoming because I’d already hinted at it before and they’d helped me out and given me advice.

Having that support and that community, especially in a sport that’s very traditional and old school, really helped me.

Because sport can be outside of everything else it gives you that completely separate support base and makes it easier to do anything.

You’ve got people you can go talk to that aren’t going to talk to your parents about it and it’s actually really important having something that you can go to and it’s just yours.

You can make new friends and almost have a bit of an escape. Even if you’re not out, it’s somewhere you can go where you can be yourself and not have to worry about everything because you’re focusing on something else.

Judo, in how traditional it is, helps with that because it’s a matter of respect on the mat, no matter who you are or where you come from, you treat them the same as you would anyone else.

As soon as you step on the mat, all your issues get left off. So, any issues you have with the players are meant to be left off the mat.

Being gay on the mat just doesn’t become an issue because nobody thinks about it.

Everyone is just training as equals.

British Judo launches new bespoke Membership Management system, ‘The Dojo... Scroll to top
Select the fields to be shown. Others will be hidden. Drag and drop to rearrange the order.
Click outside to hide the compare bar
Compare