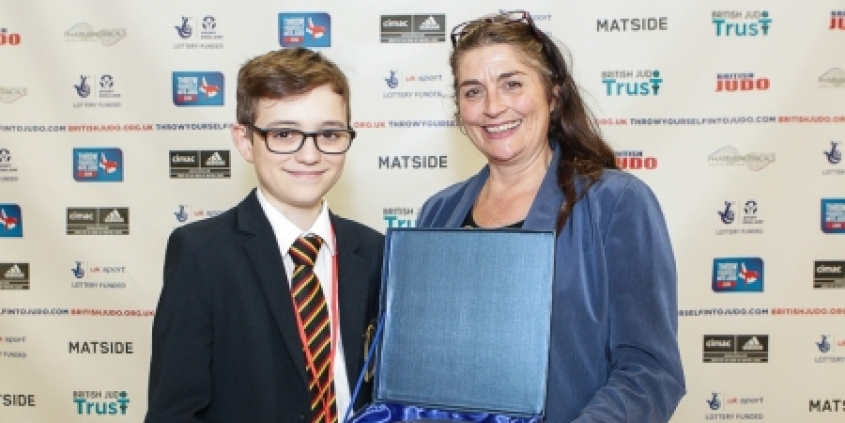 Each year at the British Schools Judo Championships, one outstanding junior referee and table official is selected to be awarded the Jerry Hicks and Ken Webber trophies for their performances at the championships.

At the 2016 British School’s Judo Championships (2-3 April 2016), the trophies for both 2015 and 2016 Championships were awarded. The Ken Webber Trophy, presented to the outstanding Junior Referee was picked up by, Louis Norton, who also collected the Young Referee of the Year Award at British Judo’s Annual Awards in November 2015.

The 2015 Jerry Hicks Trophy, went to Junior Table Official, Jonathan Lile, who was unfortunately not present to receive the award.

This year’s awards were presented on Sunday (3 April) at the 2016 British Schools Championships. The Jerry Hicks Trophy for outstanding table official, was presented to Dylan Tuckey of Harris School in Rugby, by Kim Hicks.

Dylan has been training at the Rugby Lions Judo club for over 6 years and is currently a 9th Mon. Dylan was commended for his ability to cope well with fast refereeing decisions and decisions being overturned. Dylan coped with the pressure admirably, whilst remaining polite and confident.

The Ken Webber Trophy was presented to Euan Baker of King Edward VI Community College. Euan has been training at South Brent Judo Club for eight years and is a 15th Mon. Euan has been refereeing for 2 years and aims to become an international referee, hoping one day to referee at the Olympic Games. Euan worked enthusiastically with his team and has performed consistently with a smile all weekend.

Thank you to all the officals and volunteers who attended the British Schools Championships, and congratulations to the awarded young officials.

Shin Gi Tai wins London Legacy 2012 Award at Sport Hampshire and IOW Awards Scroll to top
Select the fields to be shown. Others will be hidden. Drag and drop to rearrange the order.
Click outside to hide the compare bar
Compare