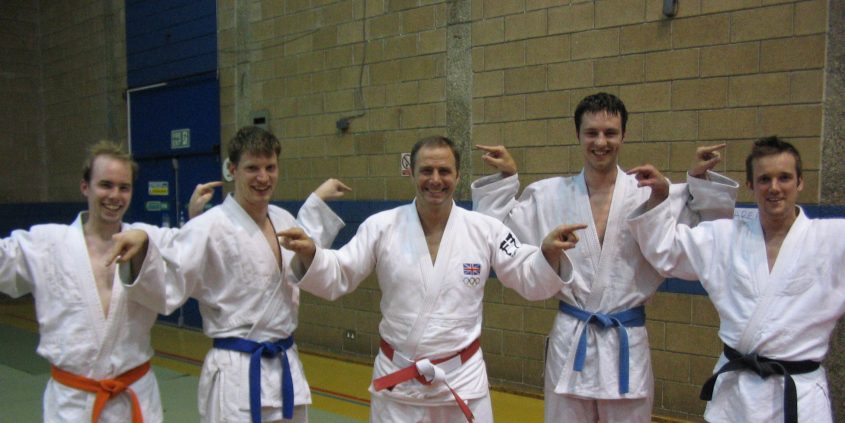 It is with great sadness that we have to inform you that John Martinez passed away on 28th April following a pulmonary embolism.

Our sympathies and thoughts are with John’s family at this time.

Pictured above (far right) taking part in a judo session with Neil Adams, John began participating in Judo in Kendal, Cumbria in the early 1980s as a young boy. He was trained by Mike Liptrott and Mike Collins amongst others.

At one competition when he was only 9 years old and a yellow belt he was beaten by much bigger boys but won a trophy for the best throw in the competition. Kendal Judo Club was a great place to be in the 1980s as Olympic Coach Tony Macconnell came back from the Moscow Olympics and set up a Youth Squad in Kendal. In 1986 the club moved to the new Kendal Judo Centre which was one of the best dojo in the country at the time and was designed by John’s father, Anthony Martinez, along with Brian Cox and Gary Davis (both local black belts).

In 1997 John moved to Newcastle to do a degree in Applied Biology. There he joined Ren Sei Kan judo club in the Tyne and Wear/ Northern area until 2007. He gained his 1st Dan black belt in Judo in June 1999.

During his time at university he also developed an interest in Jiu Jitsu. Using the skills he developed in Judo he rapidly rose to get his Shodan or 1st Dan in 2001. He was an inspiring instructor, blending his amazing energy and aptitude for martial arts with his unstoppable sense of fun. He was an Instructor or Sensei at the Newcastle University for nearly ten years and helped train many of the existing Jiu-Jitsu instructors in the region. John also gained a national reputation for his Jiu-Jitsu ability, and he enjoyed great success in the national Jitsu Foundation competitions, for example, winning the Open Randori competition in 2005.

John’s funeral service will be held at Nab Wood crematorium in Bradford, BD18 4BG on Tuesday 30th May 11:30am. Colourful party clothes are to be worn as there will be a celebration of his life after the service.

Donations in lieu of flowers to Coffee4Craig:  http://mydonate.bt.com/charities/coffee4craig

Please RSVP to Christine Harvey at christinemartinezharvey@gmail.com if you are planning to attend John’s funeral.

Referee Lisa Harrison Selected to Officiate EJU Event Scroll to top
Select the fields to be shown. Others will be hidden. Drag and drop to rearrange the order.
Click outside to hide the compare bar
Compare