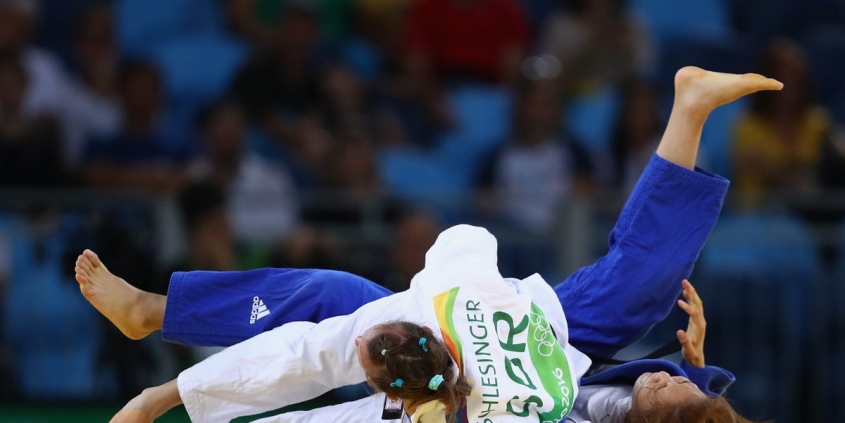 Great Britain’s Alice Schlesinger suffered defeat in the last 16 to end a disappointing day for TeamGB on Day 4 of the judo at Rio 2016.

Schlesinger, a veteran of the Beijing and London Games where she represented Israel, was competing in her first Olympics representing the country of her mother’s birth.

Schlesinger jumped onto the mat for her first round content against 23 year old Jiyun Bak of South Korea. In a close contest the judoka where inseparable after three minutes with no scores or penalties registered by either player. However, that all changed when Schlesinger successfully reversed an attack to throw Bak for the decisive ippon to progress to the next round.

The Briton looked to have scored a yuko to take the lead but the decision was reversed, leaving Schlesinger only 34 seconds to turn the tie around. Van Emden used all of her experience to see out Schlesinger’s final attacks in the dying seconds to eliminate Schlesinger from the -63kg competition.

Sally Conway (-70kg) will be on the mat on Wednesday 10 August with judo starting from 2pm UK time. Live blog coverage on the British Judo website will start from 12pm and all contests will be streamed live via the BBC website.

Davis out in Last 16

Sally Conway takes Olympic Bronze in Rio Scroll to top
Select the fields to be shown. Others will be hidden. Drag and drop to rearrange the order.
Click outside to hide the compare bar
Compare
Wishlist 0
Open wishlist page Continue shopping