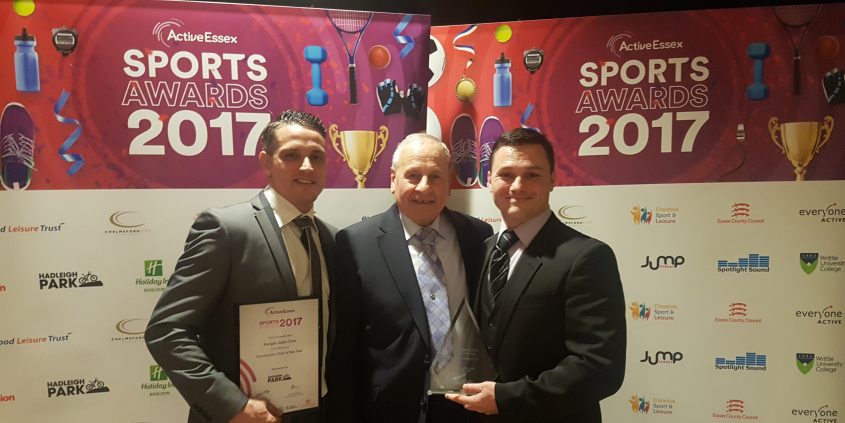 On Tuesday 6th December Kangei Judo Club, based at Janet Duke Primary School in Basildon, Essex was awarded Active Essex Community Club Of The Year 2017, having been shortlisted down to three nominees amongst thousands of nominees from around Essex.

It is a fantastic achievement for a club that only started out in May 2014 with a shared a goal and belief of creating a judo club that would be centred around the children and the community; everything is focused on advancement, encouragement, and providing a safe environment in which the kids in the community would thrive in the sport. Any money that is made is invested back into the club.

Grant Egleton from Kangei Judo Club said “Firstly, can I say what a great honour it was for us to even be nominated for this award, let alone actually  win ‘Community Club of the Year 2017’, amongst such strong and worthy nominees.”

“It’s a real validation of all the hard work we have all put in; from the club committee members, the coaches, and of course the real winners; the kids and parents of Kangei Judo Club”.

The club started out with just a few second hand judo mats in a church hall in Basildon and a small number of students, however, word of mouth meant that it quickly grew, welcoming more and more students each week. The club eventually moved to a bigger hall and were able to buy new mats with a grant from Sports England.

“Kangei Judo Club is like one big family that welcomes anybody regardless of their background, income, or origin; we are always inclusive. Members spend so much time together at training, competitions, or events, we even holiday together at an annual camping trip.”

Kangei are indeed a family, continuously helping each other; parents running the tuck shop, manning the reception desk, organising the next event, becoming coaches, or by simply ensuring their child can attend. Everyone in turn gives their time, support, enthusiasm and when needed, funding, so that money is never a barrier to succeeding!

Job Vacancy: Walderslade Judo Club Coach Scroll to top
Select the fields to be shown. Others will be hidden. Drag and drop to rearrange the order.
Click outside to hide the compare bar
Compare