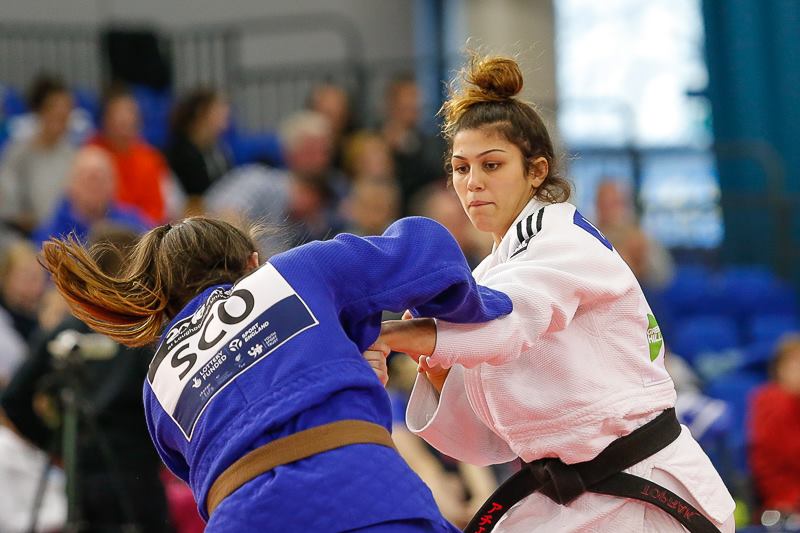 Over 400 junior Judoka descended on Sheffield today as the bid to become Junior British Champion began at the English Institute of Sport in Sheffield on Saturday 10 December.

All players had their eyes on the gold medal from the start and this produced judo of the highest quality. With some judoka having to navigate through up to four pool rounds to secure a spot on the podium, the heat was really on once the finals came around. Therefore it was a testament to their fitness and skill levels that the quality did not dip.

Notable victories included Acelya Toprak finishing the day unbeaten to claim the gold medal in the -57kg division, to make up for just missing out in 2015.

Dragon’s Judo Academy’s Daniel Rabbitt once again caught the eye. After winning -55kg gold in last week Cadet’s boys competition, he once again managed to reach the podium but could only manage silver as he was defeated by Joshua Giles in a high class final contest.

Other notable results include Olivia Piechota, who had opted to move up from -48kg, coming out on top in the -52kg category, narrowly pipping defending champion Chelsie Giles from Coventry to gold, after over three minutes of golden score.

This was not the only medal Coventry would receive in the evening however with Joshua Giles claiming gold at -55kg and Yasmin Javadian winning bronze in the -52kg female category.

There were no shocks in the -73kg bracket as top seeded Eric Ham from Glossop swept all before him winning each of his seven contests by ippon displaying a good range of tachiwaza and newaza.

You can also hear from Eric and Olivia below, just after they picked up their gold medals:

Senior British Champions Crowned at Sheffield Scroll to top
Select the fields to be shown. Others will be hidden. Drag and drop to rearrange the order.
Click outside to hide the compare bar
Compare