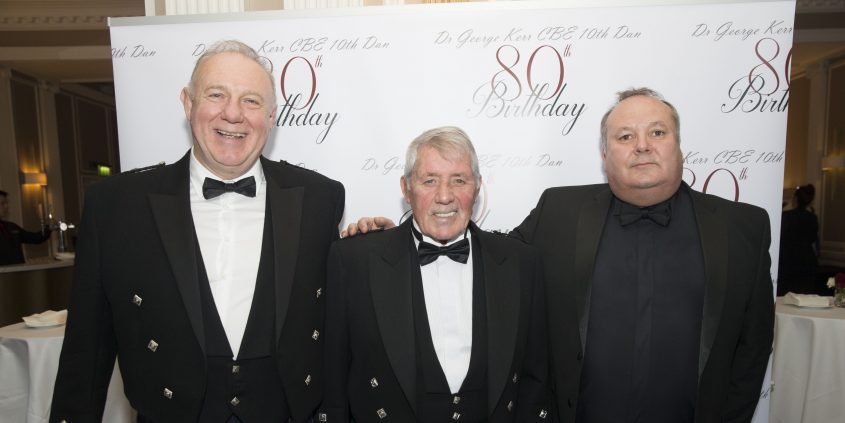 Over 120 judoka packed out the Castle Suite at the Waldorf Astoria in Edinburgh for  Dr George Kerr CBE 10th Dan’s 80th birthday celebration.

Ran alongside our friends at JudoScotland, the British Judo Association (BJA) wanted to show it’s appreciation for judo legend as he turned 80 during the week. Representatives from across the globe descended on Edinburgh for the evening to show their appreciation to a man that has changed the image of judo.

The evening took a look back at George’s incredible life in judo at the historic hotel including fascinating insights from the man himself about his time travelling to Japan, a journey which took over 1 month, coaching the Austrian team to major success, an historic officiating career, not to mention his medal-laden spell on the mat himself!

George still regularly represents the BJA admirably at major events and has hosted a range of high profile dignitaries including the likes of Russian President Vladimir Putin. He was in Rio to see Sally Conway win Scotland’s first Olympic medal and hopes to see GB Judo bring home a first Gold in Tokyo in just under three years time.

To browse the full range of photos taken on the evening, please click here

A Message From Brian Jacks

Fighting Chance Celebrates Success Scroll to top
Select the fields to be shown. Others will be hidden. Drag and drop to rearrange the order.
Click outside to hide the compare bar
Compare
Wishlist 0
Open wishlist page Continue shopping