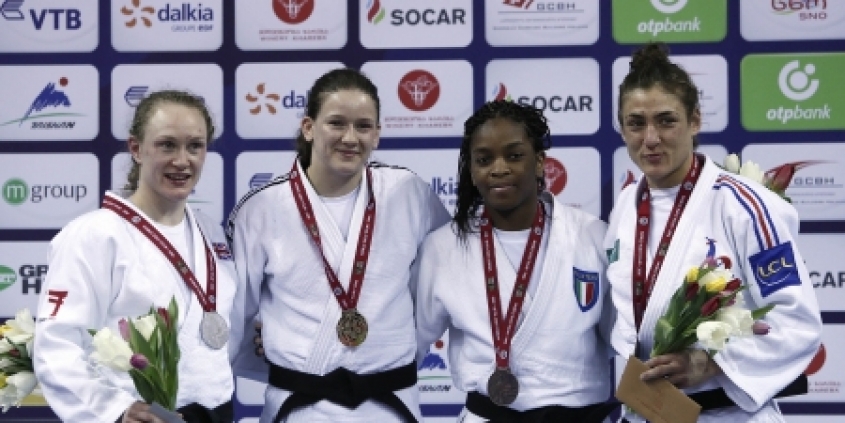 Gemma Howell (-63kgs) produced a series of impressive performances to claimed her first grand prix medal since 2014 on Day 2 of the Tbilisi Grand Prix.

In a tight opening tie with Turkey’s Busra Katipoglu, Howell managed to force her opponent into conceding two penalties for shido in the last two minutes of the contest.

That moved Howell into a second round match against Sweden’s Mia Hermansson which was also hotly contested. The Wolverhampton/Team Bath judoka was three penalty scores up in the final minute before the Swede scored a yuko which looked to have taken the victory away from Howell. However, Howell kept going a scored a waza-ari with only 8 seconds left on the clock to claim another win.

In the final of Pool C Howell was up against World number 8 Anicka Van Emden of the Netherlands in a rematch of last year’s semi-final. Howell was looking to use the momentum she’d been building to record her first victory against her Dutch opponent. After only 1 minute and 8 seconds Howell successfully disrupted Van Emden’s attempted throw and quickly repositioned herself to apply a strangle hold. The referee awarded the ippon which set up a semi-final match with Italian Edwige Gwend.

In another tough match up against a top 10 ranked player, Howell scored her second ippon of the day to beat Gwend and take another impressive scalp on her march to the -63kgs final.

With a medal already secured Howell faced Austria’s Katrin Unterwurzacher in the final. The Austrian was the number one seed and going into the competition was ranked 38 places above the Briton. But Howell started well scoring a yuko which Unterwurzacher matched moments later. However, Howell looked to have sustained an injury at some point during the contest. She battled on but Unterwurzacher scored an ippon with just over a minute to go to deny Howell the gold.

“I’m really happy, winning this silver is the best senior medal I’ve won so far. I am happy with the way I won some of the fights especially the strangles as I don’t usually win my contests that way. I’m going to carry this momentum forward with me now into the Samsun Grand Prix in Turkey next weekend”, said Howell.

Elsewhere in the -63kgs Alice Schlesinger finished in seventh place after missing out to Jiyun Bak of Korea by a single penalty score in the repechage.

Schlesinger had started the day strongly with a dominate performance against Szogedi (GHA). With a composed expression on her face, Schlesinger immediately put pressure on Szogedi, forcing two penalty scores within the first few seconds. Schlesinger then produced a spectacular throw to score an ippon 59 seconds into the match to end the contest and set up a second round tie with Ana Cachola (POR).

Both Schlesinger and Cachola were penalised early on before Schlesinger gave the Portuguese the advantage by conceding a second penalty midway through the contest. However, Schlesinger produced her second ippon of the day to progress to the final of Pool B.

After performing so strongly throughout the morning Schlesinger conceded a yuko and then an ippon within the first 40 seconds of her pool final with France’s Marielle Pruvost. The result moved Schlesinger into her repechage match with Bak which was her last contest of the day.

Tom Reed started the -81kgs competition brightly. The Devizes judoka scored a yuko after an intense early exchange with Rustam Alimli (AZE). The Azeri’s cut lip but a halted to the match midway through the contest but Reed remained focused. Reed added a waza-ari to the scoreboard when play resumed before pinning his opponent for an ippon to end an impressive first round performance.

Reed continued his good form in the second round when he met Moldova’s Nicon Zaborosciuc. In a close contest a single penalty score separated the two after three minutes before Reed implemented another pin to score his second ippon of the day.

In the third round Reed agonizingly lost 2-1 on penalties to World number 10 Alan Khubetsov.

Jemima Yeats-Brown (-70kg) was making her Grand Prix debut when she took on 23 year old Russian Valentina Maltseva. The Tonbridge judoka started the contest with a high intensity which her opponent was struggling to match. Yeats-Brown scored an ippon in under two minutes to cap off an impressive debut contest. Morocco’s veteran World number 18 was waiting for Yeats-Brown in the second round.

The 2013 African Champion struggled to cope with Yeats-Brown’s high tempo approach, with the Briton showing great athletic ability to escape an attempted throw early on. Niang forced Yeats-Brown backwards and onto the floor to score a yuko midway through the contest. The 33 year old Moroccan then used all her experience to take the momentum out of the contest, conceding two penalties in the process. A waza-ari score for Niang in the final minute sealed the contest and eliminated Yeats-Brown from the competition.

“I had a great time competing in my first Grand Prix and it was good to experience what this level is like. Although it would have been nice to get a result, I learnt a lot today and can’t wait to compete in some more events at this level”, said Yeats-Brown.

Elsewhere Jan Gosiewski was Britain’s sole representative in the -73kgs. In a tight contest with Belgium’s Dirk Van Tichelt, Gosiewski conceded a second penalty score with seconds left on the clock to go out of the competition.

Andrew Burns, Frazer Chamberlain (both -90kgs), Ben Fletcher (-100kgs) and Chris Sherrington (+100kgs) will be in action tomorrow in the men’s section on the final day of the Tbilisi Grand Prix. Natalie Powell (-78kg) and Sarah Adlington (+78kgs) will also be on the mat on Sunday looking for more valuable Olympic qualification points for Rio.

Please note that the clocks go forward by 1 hour this evening. Watch all the action live on ippon.tv from 06.00am GMT and follow @BritishJudo on Twitter for live updates on the British competitors in action.

Tough opening day for the Britons at Tbilisi Grand Prix

Second bronze of the year for Powell on final day of Tbilisi Grand Prix Scroll to top
Select the fields to be shown. Others will be hidden. Drag and drop to rearrange the order.
Click outside to hide the compare bar
Compare