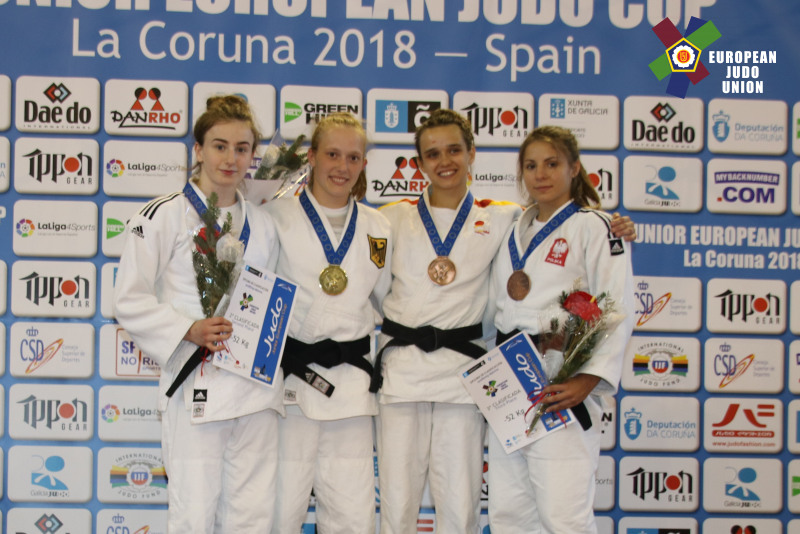 GB Judo were once again on the mat at the weekend, this time in Slovenia and Spain. 17 British judoka were in action at the European Kata Championships and the La Coruna Junior European Cup.

The six-strong GB team were unable to challenge for medals in Koper at another high-class Kata Europeans.

Victoria and Lisa Cleevely finished tenth in their group of the Ju No Kata competition with a score of 359,5.

In the Kime No Kata competition, Robert and Ricky Cleevely finished seventh in their group with a score of 484,5.

There was also a twelfth-place finish for Alexander Reid and Paul Laverty in Goshin Jutsu as they finished with a score of 455,0.

The Coventry judoka had also won silver at the Coimbra Junior European Cup back in February.

Javadian made short work of her first opponent as she won inside the first 20 seconds against Eva Mendes (POR). A waza-ari in the final minute was enough to see off Italy’s Martina Castagnola in the quarter-finals.

The British judoka had to grind out the win in her semi-final against Izaskun Ballestros Gonzalez with Javadian scoring a waza-ari after two minutes and 51 seconds of golden score.

The final against Annika Wurfel (GER) was another golden score affair with the German judoka taking the win by waza-ari score.

There were also fifth place finishes for Amy Platten (-48kg) and Wesley Greenidge (+100kg) and a seventh place for Olivia Spellman (-63kg).

“Jamie’s Kids” Team Announced Ahead of Brain Tumour Tourn... Scroll to top
Select the fields to be shown. Others will be hidden. Drag and drop to rearrange the order.
Click outside to hide the compare bar
Compare