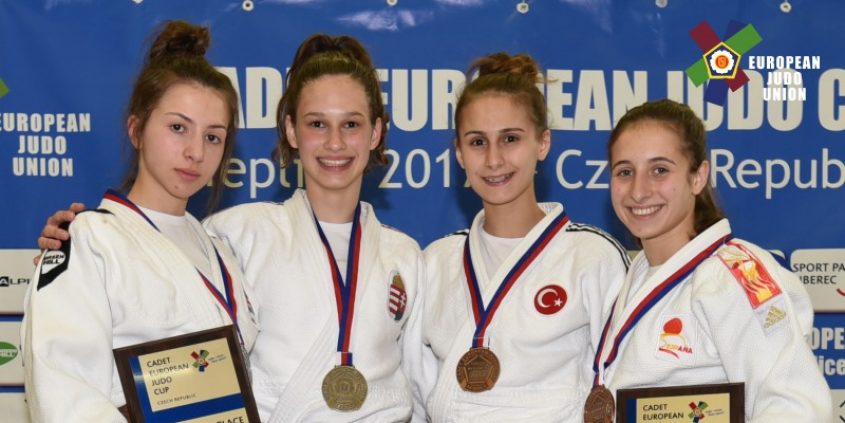 On a weekend that saw GB Judo’s senior squad claim three medals at the Antalya Grand Prix in Turkey, our Cadet and Junior judoka were flying out to Italy and Czech Republic for a weekend of competition.

A 36 strong squad made the trip to Czech Republic to tale part in the Cadet European Judo Cup in Teplice.

Amy Platten (-44kg) has been in fine form all season and showed no signs of slowing down as she claimed a first silver medal and fourth European Cup medal of the season to accompany bronze medals won at Fuengirola, Follonica and Coimbra. This has seen Platten rise up to 4th place in the World rankings and she will be looking to close the gap on the 3rd spot with a strong showing in her next competition in Berlin at the end of the month.

Yasmin Javadian was looking to join her compatriot on the medal podium but fell just short as she finished the in the -52kg competition. In a strong tournament which saw 45 competitors entered, Javadian progressed serenely through the tournament but was stopped in her tracks by German Annika Wuerfel in the final pool contest which dropped her into the repechage where she was eventually defeated by Federica Silveri (ITA). The result keeps her at 7th place in the World Rankings. The 5th place continues her run of having placed in her last seven events dating back to May 2016.

Unfortunately the Junior squad wasn’t able to bring back a medal from the Lignano Junior European Cup in Italy. The squad consisted of three GB judoka including current British Junior -52kg champion Olivia Piechota, Welsh judoka Steph Walker (-57kg) and Joshua O’Connor (-73kg). Piechota was defeated in the quarter finals by World No.7, and eventual winner, Laura Abelenda Martinez (ESP) and couldn’t find a way past Sofia Petitto (ITA) in the repechage.

Medals Galore on Offer at the British Schools Championships 2017

First SN/VI British Schools Champions Crowned Scroll to top
Select the fields to be shown. Others will be hidden. Drag and drop to rearrange the order.
Click outside to hide the compare bar
Compare