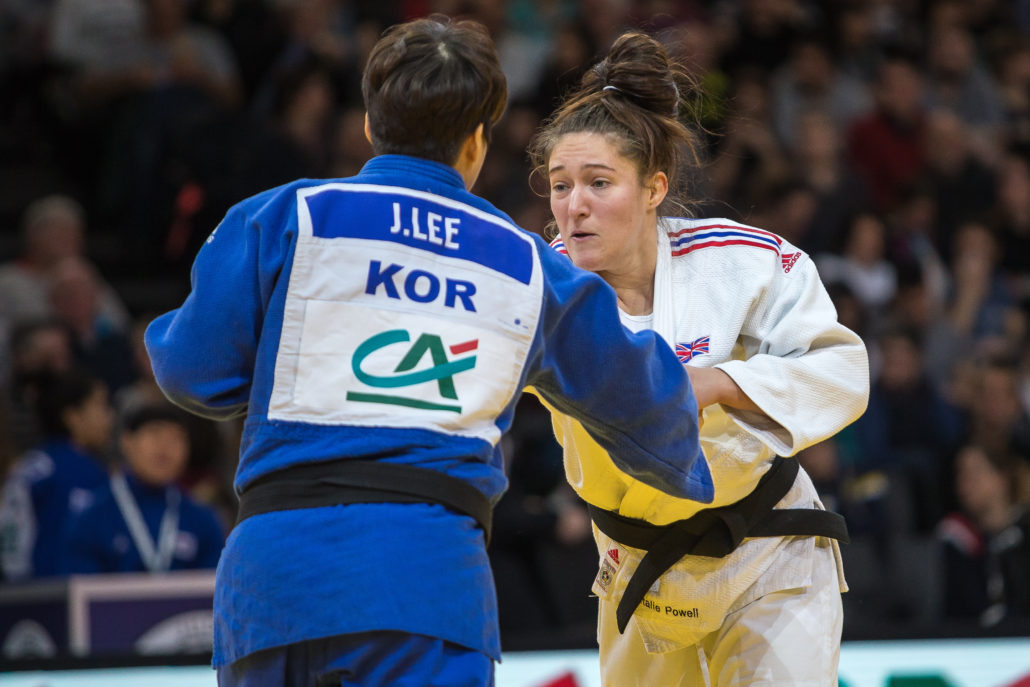 The Shlomo Arena in Tel Aviv will host the opening Grand Prix of 2019 where an eleven-strong GB Judo team will be aiming to start the year on a high (24 – 26 January).

The last time GB Judo were in Tel Aviv was for the 2018 European Judo Championships. On that occasion, British judoka finished with five medals, our best medal haul since the 1998 Europeans.

Lucy Renshall (-63kg), Natalie Powell (-78kg) and Ashley McKenzie (-60kg) were among the medallists last year and all three go in among the top seeds this week.

Renshall is joined at -63kg by Alice Schlesinger. The three-time Olympian finished 2018 well, winning silver at The Hague Grand Prix for the second year in a row.

SKK fighter Renshall missed six months of competition in 2018 due to a knee injury but she made her competition return at the Guangzhou Masters in December.

Both fighters have byes into the second round. Renshall will face the winner of Isabel Puche (ESP) and Hannah Martin (USA) while Schlesinger takes on either Geke Van Der Berg (NED) or Iana Poliakova (RUS).

Powell goes in as top seed and faces one of Laia Talarn (ESP) or Chloe Dollin (FRA) in her first contest of the day.

Jemima Yeats-Brown will also step on the mat at -78kg. The Ryecroft judoka finished fifth at the World Judo Championships in Baku last year.

She takes on Italy’s Valeria Ferrari in the first round.

Two-time World medallist Nekoda Smythe-Davis (-57kg) steps on the mat as top seed and will be aiming to secure her first Grand Prix medal since 2017.

Smythe-Davis won silver at the Baku Worlds to go along with her 2017 bronze in Budapest. After a bye into the second round, she will face Jaione Equisoain (ESP) or Margriet Bergstra (NED).

She faces the experienced Sanne Verhagen (NED) in the first round.

Kimberley Renicks (-48kg) faces young Russian judoka Daria Pichkaleva (RUS) in the first round. The Commonwealth Games champion has come to close to medalling on a number of occasions over the last couple of years and will be looking to get back to winning ways.

The Coventry judoka will face Georgia’s Mariam Janashvili (GEO) or Russia’s Alesya Kuznetsova in her first contest of the day.

Ashley McKenzie (-60kg) has enjoyed a stellar two years this cycle with five medal rostrum finishes including bronze medals at the 2018 Europeans and Paris Grand Slam.

The Camberley fighter will be seeded second in Tel Aviv and will have the winner of Rakhmon Jumaev (UZB) and Hakberdi Jumayev (TJK).

Glossop judoka Eric Ham (-73kg) has form behind him with gold medals at the 2018 Senior British Championships and 2019 Scottish Open.

He faces Italy’s Augusto Meloni first up, with a potential round of 16 contest against Rio 2016 silver medallist Rustam Orujov (AZE).

Frazer Chamberlain (-90kg) had a strong 2018 with three fifth place finishes at the Tunis, Cancun and Tashkent Grand Prix.

He takes on Jesper Smink (NED) in his first contest in Tel Aviv.

Competition starts at 0800 UK time on each day with the final block starting at 1500 UK time. You can watch the competition via live.ijf.org and follow @BritishJudo on Twitter for updates throughout.

Smythe-Davis starts 2019 with Tel Aviv bronze Scroll to top
Select the fields to be shown. Others will be hidden. Drag and drop to rearrange the order.
Click outside to hide the compare bar
Compare
Wishlist 0
Open wishlist page Continue shopping