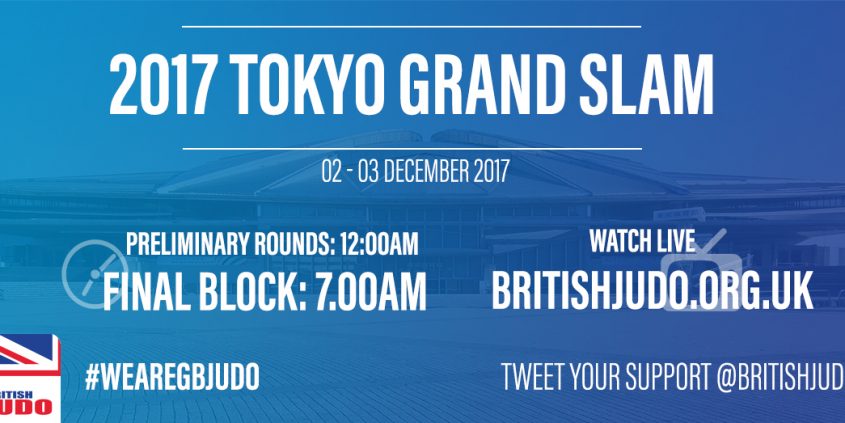 This weekend (December 2 – 3) sees GB Judo taking to the mat in Japan for the 2017 Tokyo Grand Slam.

The final Grand Slam of the year is always one of the highlights of the judo calendar with a world-class field of judoka entered. Two year’s ago Gemma Gibbons won a memorable bronze medal in Tokyo to cap off a superb Asia tour for her personally, which also saw her medal in the Qingdao and Jeju Grand Prix.

GB have entered a nine-strong team for the Grand Slam, with a number of the team fighting in Tokyo for the first time.

“Everyone is looking sharp and are ready to fight in one of the biggest competitions of the year. The training has been good out here and the players have all acclimatised well.

“There are some tough draws but at this level there are no easy fights and if they all fight to the best of their ability they will do well.”

Five GB Judoka will be in action on the first day of the Grand Slam at the Tokyo Metropolitan Gymnasium.

Kelly MacDonald (-52kg) showed some good form at the Abu Dhabi Grand Slam in October, finishing seventh and she will be hoping to end the year on a high. The -52kg category is as strong as expected with current World Champion Ai Shishime (JPN) the standout name alongside the likes of Gili Cohen (ISR), Natsumi Tsunoda (JPN) and Amandine Buchard (FRA).

Smythe-Davis has been in great form in the latter half of the year since returning from injury. The Ealing judoka has medalled at her last three competitions including World bronze in Budapest. Livesey took home a bronze medal at the Antalya Grand Prix and finished seventh at the European Championships. The SKK judoka has struggled for form of late but on her day she has the standing judo to cause real problems.

The fact that only one member of current world top ten at -63kg is not entered this weekend is a good sign of how tough this competition will be. The British duo of Alice Schlesinger and Amy Livesey, ranked WRL 6 and 7 respectively, have both enjoyed great success in 2017.

Schlesinger goes in off the back of a strong silver at The Hague Grand Prix having won European Championship bronze and Baku Grand Slam gold earlier this year.

Livesey has had her best year at senior level to date with Grand Slam bronze in Ekaterinburg as well silver at the Cancun Grand Prix and a seventh on her World Championships debut in the summer.

Current -78kg World No.1 Natalie Powell will be aiming to retain her place at the top of the rankings of the second day of competition in Tokyo.

It has been a year of firsts for Powell who has enjoyed a stellar year. The Welsh judoka added a second European Championship bronze medal to her collection before reaching her first Grand Slam final in Ekaterinburg and winning silver at the Cancun Grand Prix.

A maiden World Championship medal soon followed as she took home bronze before a gold at the Abu Dhabi Grand Slam saw her top the rankings for the first time.

Her closest competitor for the No.1 ranking, Guusje Steenhuis (NED), is entered for Tokyo and will be hoping to take top spot ahead of the World Masters two weeks later. Japanese duo of Mami Umeki and Ruika Sato will be a threat, as will Germany’s Luise Malzahn.

-70kg duo of Sally Conway and Gemma Howell will be aiming to make a big impression on the second day of competition. Conway is fighting for the first time since the World Championships in Budapest, where she went out at the round of 16.

The Rio bronze medallist has two silver medals to her name this year at the Cancun Grand Prix and the Bucharest European Open.

Howell has had a good 2017 having moved up to -70kg at the start of the year. The London 2012 Olympian has taken home two Grand Prix bronze medals in Antalya and Cancun.

Chizuru Arai (JPN) will be looking to add a third Tokyo Grand Slam gold to her collection, having topped the medal rostrum at the World Championships this year. However, a strong European contingent including Kim Polling (NED), Marie-Eve Gahie (FRA) and Laura Vargas Koch (GER) are capable of taking top spot.

Stuart McWatt (-81kg) will be making his Grand Slam debut after coming back from two ACL reconstructions. The Garioch judoka made a strong return from injury this year as he helped the Junior Men’s team win bronze at the Junior European Championships in Maribor.

He followed that up with a seventh on debut at the Zagreb Grand Prix and a fifth at the Junior World Championships, also in Zagreb.

World No.1 and 2 Frank De Wit (NED) and Saeid Mollaei (IRI) will be continuing their rivalry in Tokyo though there are a number of other classy competitors in this category including Victor Penabler (BRA), Sagi Muki (ISR) and Uuganbaatar Otgonbaatar (MGL).

Competition starts at 0000 UK time on both days with the final block scheduled to start at 0700 UK time with live streaming via britishjudo.org.uk. 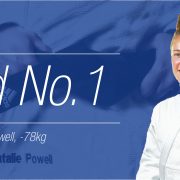 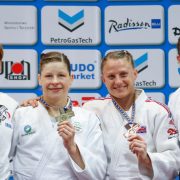 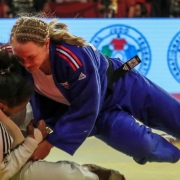 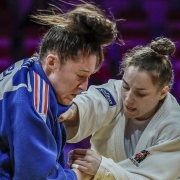 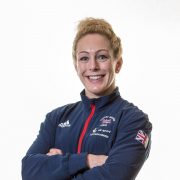 Seventh for Schlesinger in Tokyo Scroll to top
Select the fields to be shown. Others will be hidden. Drag and drop to rearrange the order.
Click outside to hide the compare bar
Compare
Wishlist 0
Open wishlist page Continue shopping